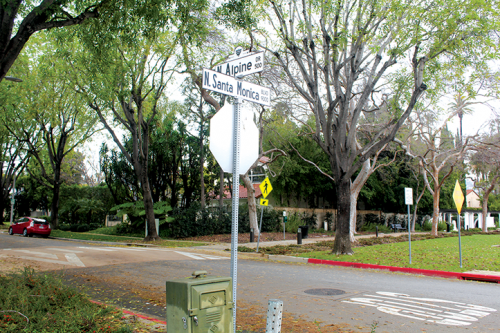 Traffic will be temporarily diverted while crews with the Los Angeles Department of Water and Power replace aging water valves beneath Sunset Boulevard at Sierra and Alpine drives in Beverly Hills. (photo by Joey Waldinger)

The utility hopes to replace both valves by the end of March, and although recent rains have delayed the project from starting, it is still on track to end on time, Farag said.

“These valve replacements are a critical infrastructure project for LADWP,” utility spokeswoman Deborah Hong said. “The valves are the first lines of defense during emergencies and catastrophic events such as a water main break. We close these valves in order to isolate the large water mains so our crews are able to perform necessary repairs to restore streets and water service to customers.”

Occasional lane closures will occur on Sunset Boulevard during the replacement of the first valve to accommodate work equipment, but Sierra Drive will remain open throughout the project, Farag said. The area around the valve, which is located on the sidewalk, will be fenced off to protect pedestrians, he added.

Because the Alpine Drive valve is located in the street, westbound and eastbound traffic on Sunset Boulevard will be reduced to one lane in each direction, and traffic controllers will be stationed at the intersections with Alpine Drive and Foothill Road.

Access for emergency personnel and residents will remain open during construction, and all lanes will open after work hours, Farag said. He added that the LADWP will use message boards to alert motorists about upcoming closures, and the department’s public information staff has begun an outreach effort to warn of the upcoming work.

Beverly Hills Mayor Lili Bosse said that while she supports the project, she was concerned about closing traffic on both sides of Sunset Boulevard.

Farag said that crews will only be working on both sides of Sunset Boulevard during a scheduled water pipeline shutdown in March. At least one side of the street will be clear at all other times during the project. Besides the scheduled water shut off, the valve replacements will have no impact on water delivery to nearby residents, he added.

During public comment at the meeting, Beverly Hills resident Nooshin Meshkaty asked if the LADWP could coordinate with the Beverly Hills Unified School District to avoid congestion during school hours on Alpine Drive, as that street feeds into Hawthorn Elementary School. The LADWP did not respond to requests for comment.

Returning students and workers urged to mask after break