‘The Last of Us’ avoids a dystopian disaster 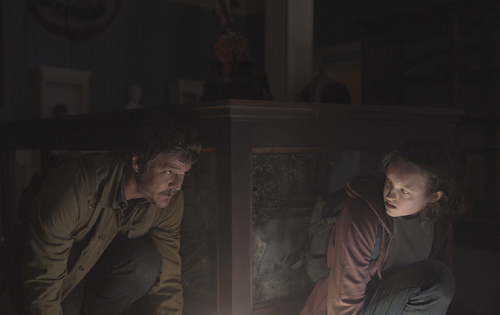 Joel (Pedro Pascal) and Ellie (Bella Ramsey) are standouts in “The Last of Us.” (photo courtesy of HBO)

Disappointment is an old friend to fans anxiously awaiting adaptations of favorite stories. From comics series “Y: The Last Man” to the “Halo” video games, highly anticipated franchises make the media jump only to fizzle out.

Next on the docket, dystopian thriller “The Last of Us,” based on a beloved PlayStation adventure game. Can it ascend a long line of flops? And do so premiering on a network whose overlords don’t have the greatest track record right now? That’s two strikes.

More so, pilots are a gamble, something best forgiven than used as a defense to cut ties and run. Add to that video games’ long, tragic history of terrible, unconscionable adaptations. That’s strike three. Breathe deep. “The Last of Us” is a home run. The journey is only 80 minutes in, and so much happens.

The pilot nicely splits into three memorable parts: a dramatic cold opening that foreshadows not a global pandemic but something more dire. Cut to Day Zero in 2003. Joel (“The Mandalorian’s” Pedro Pascal) and daughter Sarah (Nico Parker) enjoy pop’s birthday until something slowly brewing in the background throughout the day lands on their doorstep.

It’s zombies. Well, that term never comes up. Sarah, Joel and his brother Tommy (Gabriel Luna) don’t have time to reflect and diagnose. People begin attacking each other, and they do so with more speed than the average walking dead. This entire sequence takes near half the episode, but it’s a teeth grinder.

Finally, it’s present day in a dystopian society. The infected rule the world, but at least one human stronghold comes with a pretty big string attached, fascist control. New characters appear along with this new setting. Who is Tess (Anna Torv) to Joel? Perhaps romantic or merely close friends. Jury’s out.

And then Ellie (Bella Ramsey from “Game of Thrones”), a primary character from the games, finally arrives. Ellie is special, but nobody can know why. And soon Joel and Ellie meet and begin their own adventure into the unknown world riddled with slavers, raiders and various kinds of infected.

“The Last of Us” almost seems to show off a full resume of skills, like a sizzle reel begging viewers to keep tuning in each Sunday for the next nine weeks. First skill: The horror elements are intense. Second skill: Thrilling moments ooze expert execution.

Third, the dystopian world unfolds quickly, freed from burdensome exposition. Is there a doomsday cult exploiting folks’ fears? You bet, and they aren’t a centerpiece but a natural byproduct laced into this world’s fabric. Fourth, the performances shine bright.

Lastly, how about some abstract cinematography contrasting a world undone by a terrible infection. “The Last of Us” works on so many levels. It’s a delicious win for video game adaptations, pilots and Sunday night viewings.

Apparently, the recipe for success boils down to two ingredients: showrunner Craig Mazin (HBO’s “Chernobyl” creator) and writer Neil Druckmann (“The Last of Us” and several “Uncharted” game stories). Bring in a proven TV producer and the original game writer.

OK, that and Pascal. The man is finally, rightfully blowing up in his late 40s. He owns the “Star Wars” universe, had a great time alongside Nick Cage, who played himself, and he’s a video game savior. He’ll lead this show somewhere truly special.

Pascal is a worthy lead, but in the pilot, the real standout performance actually belongs to Parker as Joel’s daughter. She’s new to acting (though her mother Thandiwe Newton probably passed on some tips), but she serves as the emotional core here.

More familiar faces will arrive in later episodes, including Nick Offerman, Melanie Lynskey and Ashley Johnson, who voiced Ellie in both games. It’s sure to be an insane ride, but the first episode is also a stellar lesson: Pilots don’t need to be a slog. This is what it means to start with a bang.