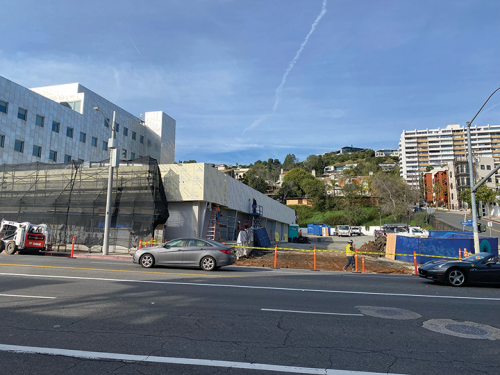 Construction was underway at the future Supreme store and former Tower Records building on the Sunset Strip Jan. 18. (photo by Jerome Cleary)

Progress has been made at the former site of Tower Records on the Sunset Strip, after months of seemingly stalled progress on the building’s transformation into a new Supreme store.

“There have been workmen on the site since August each month and each week, but not doing that much,” West Hollywood resident Jerome Cleary said on Jan. 18. “But today they’re jackhammering up concrete, and there’s a lot of working like beavers suddenly all at once. We still don’t know when they’re opening.”

Newmark leasing agent Jay Luchs, who represents the site, said everything is on schedule.

“There’s no delay in construction. There’s a full workout happening. There’s construction people on site, there’s a beautiful building that’s been rebuilt that you can see. It’s all happening,” Luchs said.

When Supreme leased the space, controversy in the community ensued due to the removal of the iconic Tower Records signage. The sign that existed, however, had been placed for a 2015 documentary on the former music haven, “All Things Must Pass,” and was not the original. The flagship location closed in 2006, following the company’s bankruptcy.

“I believe the community is still sad about the iconic Tower Records signage and space. Through the zoom meeting last January 2022, we were [told by Supreme about how much] construction was going to be done, and they were shady about disclosing what they were going to do. And then, when they start doing it, we were shocked at how much they altered the frame in the building,” Cleary said.

There were attempts by Supreme to negotiate a compromise, but Luchs said the Tower Records intellectual property holder, still listed as Tower Records, were resistant.

“Supreme wanted to keep the Tower Records logos up. And the IP holder killed it. There’s a lot of love from Supreme. The brand actually has human beings that work there that make decisions. It’s not like a computerized system. They really want it to adapt and fit and pay homage to the culture of the building and the area and the industry.”

Concern was raised by community members when the building was taken to the studs and gutted last April. When the opening of the Supreme store was delayed, Cleary speculated it might have been related to the company’s fortunes at large. Luchs said, simply, “Supreme is not “hurting for money.”

Cleary also raised concerns about the recent rainfall, which he said seemed to cause flooding issues at the building.

“It did not leak for 50 years even … but the Supreme construction and redesign jeopardized the structure [so] significantly it’s now leaking and flooding, and in 10 days there’s a couple more days of rain. How can you open up a clothing store with [high-end] streetwear and sneakers if water is leaking and flooding into the building?”

“They’re not going to open a store with rain coming in,” Luchs said. “So, they’re doing everything they have to do in an old building to upgrade. They’re putting a lot of money into it, [have] designed it, they’re building it, they’re doing things to it so that they can make it a very special space.”