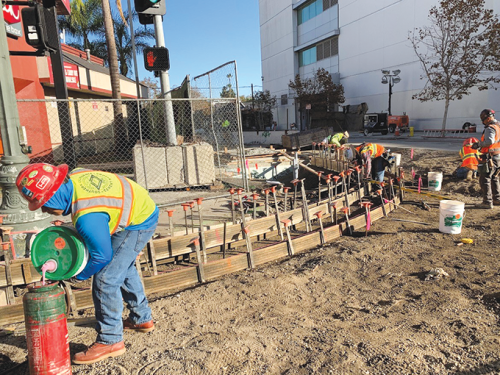 Crews are repairing curbs, sidewalks and the street surface near Wilshire Boulevard and Sycamore Avenue. (photo curtesy of Metro)

Metro is keeping pace with subway work on the Purple Line Extension project and is providing updates on construction along Wilshire Boulevard.

Street, sidewalk and curb restoration work was conducted this week along the north side of Wilshire Boulevard at Sycamore Avenue, near a new subway station at Wilshire/La Brea. The process involved backfilling and repaving streets. The restoration will continue through February in work zones along the north side of Wilshire Boulevard, which will be reduced to two lanes in each direction between Highland and La Brea avenues.

From Jan. 20-23, crews will begin preparations for connecting the existing and new Purple Line train control systems. The work will occur near Wilshire/La Brea from 9 p.m. on Jan. 20 through 4:30 a.m. on Jan. 23.

A K-rail work zone has also been implemented on the north side of Wilshire Boulevard between San Diego Way and Spaulding Avenue and will be in place for approximately one year. Wilshire Boulevard will be reduced to two lanes in each direction at La Jolla Avenue.

At Wilshire/La Cienega, intermittent sidewalk closures may be in place through Jan. 20 on the north side of the Wilshire Boulevard between La Cienega Boulevard and Hamilton Drive. Street-level work on the south of Wilshire Boulevard will continue for approximately 10 months.

Station construction, ground improvement and cross passage work is ongoing near Wilshire/Rodeo. Utility work is in progress with the installation of permanent power feeds to the station. The installation of geotechnical instrumentation will continue through the end of January. A total of 14 locations along the tunnel alignment will require lane and sidewalk closures. Work hours will be Monday through Friday from 8 a.m.-11 p.m. along Wilshire Boulevard. Closures will remain in place 24 hours until work at each site is completed, which will take two to four weeks.

Construction and excavation will continue in January for a new subway station in Century City. Through the end of February, crews will install permanent power feeds to the future station. Work will occur along Wilshire Boulevard between Dayton Way and Rexford Drive. Wilshire Boulevard may be reduced to one lane in each direction overnight and on weekends in the work areas. Utility investigation and instrumentation installation will also be ongoing, prompting temporary lane closures along Constellation Boulevard and Solar Way.