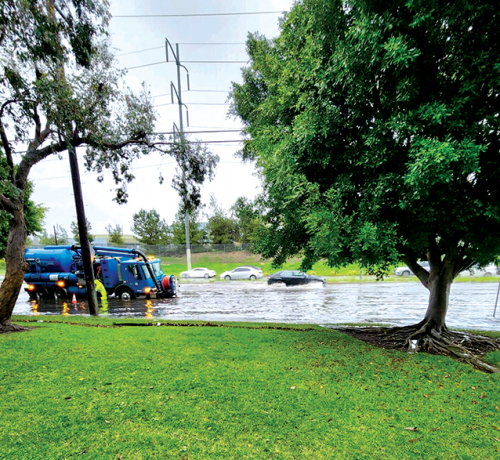 With storms hitting Los Angeles over the past few weeks, field crews from the Bureau of Street Services and Los Angeles Sanitation and Environment have been out in force, handling thousands of service requests throughout the city. The crews have responded to tree emergencies, asphalt repairs, land and mudslides, sinkholes and flooding incidents.

“I send my heartfelt ‘Thank you’ to all of our crew members working through these challenging times. I am very proud and grateful for all of our members at L.A. City Public Works,” board president Aura Garcia said.  “Handling these types of emergencies is hard work and our field crews perform them with high standards. Not only were they valiantly cleaning up from the recent rains, they were also preparing for the upcoming storm to prevent as much damage as possible and keep Angelenos safe.”

This week, urban forestry crews completed 90% of the 557 tree emergencies received by the Bureau of Street Services

The bureau’s maintenance division has received 2,763 requests, including 610 for land and mudslides and 1,542 for potholes. Of those, more than 50% have been completed thus far.

Between the two recent storms, LASAN received 385 requests to clear flooding caused by clogged storm drains or catch basins, and crews have completed 38% of the work. The bureau had crews working feverishly to shore up the slopes at the massive sinkhole that occurred in Chatsworth, with the remainder of the repair work to be completed by Caltrans.

For services, residents can contact the city’s 311 Call Center, use the MyLA311 app or visit lacity.gov/myla311.