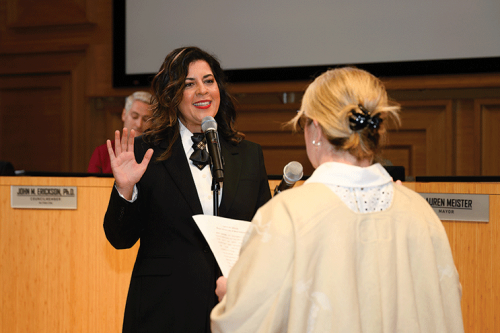 West Hollywood Mayor Sepi Shyne is already bringing her unique vibe to her tenure. Shyne was sworn into her new post on Jan. 9 in a ceremony that included performances that paid homage to her Iranian American culture. She is the first Iranian American woman to serve on the West Hollywood City Council, and she is now the first to serve as mayor. Trailblazing, though, is only a small part of what Shyne will bring to the table.

Among her key objectives are finding ways that will create greater access for residents and visitors with disabilities, working with Los Angeles County to ensure behavioral health crisis response units are fully supported and starting the Business Recovery Task Force, “to ensure we have the best and brightest at the table developing a five-year blueprint for business recovery from COVID, success and diversification.”

Of particular concern to community members in the last year has been public safety, and Shyne is already working to tackle that issue head on.

“[I’m] collaborating with our public safety department which includes our new sheriff, our West Hollywood Captain Bill Moulder. whom I have already had an excellent meeting with, leadership, staff, deputies, Block by Block security ambassadors and our fire department to ensure that we have new systems in place that provide better safety and training to reduce crime, improve community engagement, and create health and safety for all,” Shyne said.

She will also work to directly engage with residents on a regular basis with the launch of “Sips with Sepi,” a monthly community engagement event. The first is scheduled for Jan. 21 at 9 a.m. at the Domain WeHo Apartments, located at 7141 Santa Monica Blvd.

“The current version of the council is nicely balanced, and I look forward to working with them. We are also still majority progressive, so I am happy we will be able to move our policies forward,” she said.

The first quorum with the new council was Dec. 19, and Shyne said that she felt the meeting rounded out 2022. She promised, however, that she will not allow meetings to last into the next day, as they often have in the past.

“I will be ending our meetings at 11:30 p.m. because it is not fair to the public to have our meetings go that late and not the best way to make public policy decisions past that time. If there are crucial items that are on the agenda that may make the meeting go a bit longer, my colleagues and I can vote to extend it a bit,” she said.

Shyne was elected to the council in 2020, and she credits her colleagues with helping her grow in the time since she joined.

“I learned a lot my first two years, both from Supervisor Lindsey Horvath when she was mayor and from Councilmember Lauren Meister when she was mayor, so taking the positives from both has been helpful. I learned a lot from my prior colleague, former Councilmember John D’Amico as well about the art of pushing future visions into reality with brave courage. In the past two years I have also worked extensively with staff and passed more than 60 items and have developed wonderful working relationships with them. I have also met with, spoken to and listened to many West Hollywood residents,” Shyne said.

It is her personal history that has provided so much of her drive. Born in Iran, Shyne was 2 years old when the country was torn by revolution and her family was forced to flee. In her unique position as mayor, she hopes to shine a light and help bring about the kind of equality and acceptance that is standard in West Hollywood to her birth country, as well.

“My commitment to you is to use every bit of power that I hold by building relationships, passing resolutions and partnering with other elected officials on all levels to ensure that democracy is restored to Iran and the Iranian people are finally free of this darkness. As a sheer zan (a lioness in Persian) I know that women are the source of creation and bring life to this planet and it is women that will bring freedom to Iran. I will be one of those women taking down this darkness and one day in our lifetime, each and every one of us who has been ostracized from being in our homeland whether Jewish, Christian, Baha’i, LGBTQ and women who refuse to be oppressed will once again be free in Iran. That is my promise to you, and I am a woman of my word,” Shyne said.

Shyne, who has lived in West Hollywood since 2009, describes the city as a place “created with purpose and heart.” She credits the community, too, with helping her find herself.

“We provide for so many through our social service programs, innovative forward-thinking policies, creative infrastructure and development, and our pride in providing a safe haven for our LGBTQ community as well as other historically marginalized groups and immigrant communities,” Shyne said. “We are a walkable city that adores our pets, we know our neighbors and love our community. I believe that the reason for West Hollywood’s success is because West Hollywood is a city of purpose. I discovered my own purpose while living in West Hollywood. And that is to illuminate which means to bring light to the world by serving humanity, uplifting and elevating people and eradicating the toxicity and darkness that has pervaded our social fabric, especially in politics.”

The significance of her position on the City Council, as well as her new title, are not lost on Shyne, who expressed humble gratitude for the opportunity to serve.