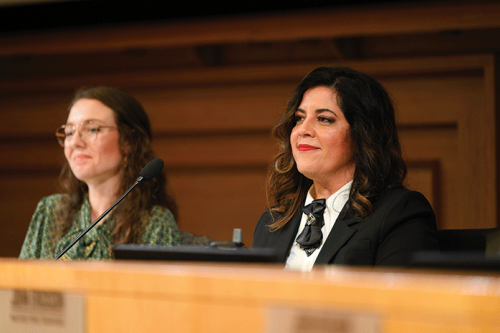 Mayor Sepi Shyne, right, who is shown on Jan. 9, took the gavel for the first time at the Jan. 24 West Hollywood City Council meeting. (photo by Jon Viscott)

“I wanted to let the public know that we will be for the rest of my term ending our meetings at 11:30 p.m. and if there are critical items that must still be heard we will vote as a council to extend by 30 minutes if needed,” Shyne said. “The members of the public deserve to have efficient meetings, and it’s very difficult to stay here so long through the night, and we as makers of public policy need to be alert to really vote on the people’s business.”

She also said would continue Councilwoman Lauren Meister’s mayoral implementation of limiting public presentations to two, with Shyne adding that speakers for the presentations be limited to two with a two-minute time limit.

One of the most significant actions taken to streamline the meetings was to move council member comments from the beginning of a meeting to the end. The motion was initially brought forward by Councilman John Heilman.

“I’m happy that the council is moving their comments to the end,” resident Mikey Freedman said. “Thank you.”

Freedman went on to commend Shyne for following up with her about a concern she had with scooters, stating that the pair had a meeting scheduled for Jan. 25.

However, not all members of the public were in favor of the change to council member comments.

“I actually would like to see [the comments] toward the front. The public deserves to hear what the council has to say about the things they present to you instead of waiting all the way to the back,” resident Annie Jump Vicente said. “I think there is value for the public in hearing what you have to say in your comments, to the extent that they are kept reasonably brief. And I like to hear those. I don’t necessarily want to stay for the entire meeting,” resident Rick Watts said.

“I think it’s worth giving it a try, and if it doesn’t work we can always do another item to change it back,” Meister said.

“We are dedicated to ensuring that we can do these meetings timely and efficiently and that requires all of us, not just some of us, to ensure our comments are concise and we can do the public’s business,” Mayor Pro Tempore John Erickson said.

Shyne’s first meeting saw the public come forward with some of the most pressing issues facing the city, including racial equity. Jonathan Wilson, who served on the city’s Social Justice Task Force and is CEO of the West Hollywood-based business consulting and services organization Dubb Value Creation, discussed the lack of BIPOC representation in upper-level management throughout the city.

“I’m tired, tired of being the only one or one of a few,” Wilson said. “It’s clear that BIPOC prosperity in the city of West Hollywood is limited. The time is now to make that change.”

“It continues to be skipped over. My Black life doesn’t matter,” Harling said. “My ancestors were the backbone to this country. The original stock in this country, and we’re still being ignored.”

Harling went on to discuss recent incidents of violence against Black individuals by law enforcement. He pointed out that none of the council members had made an adjournment for Keenan Anderson, a Black man who died while in Los Angeles police custody on Jan. 3.

Shyne addressed each public commenter directly throughout the meeting.

“I hear you. I see you, and thank you for holding us to account,” Shyne said, in response to Harling’s concerns, going on to discuss in detail the life and death of Anderson and the need for better oversight within law enforcement, including the city’s own division of the Los Angeles County Sheriff’s Department.

She also honored alkaline water deliver company Divine H20 and its founder Sofi Mamo, who also runs the Divine Homeless Project that works to meet the needs of the unhoused community.

“With [our] vision and some truly wonderful people, we have been able to accomplish pretty amazing things in the last 10 years,” Mamo said. “However, none of that would’ve been possible if it wasn’t for our Mayor Sepi Shyne and our volunteers Divine Angels.”

The meeting was uniquely West Hollywood, with one special presentation honoring the Sisters of Perpetual Indulgence with a commendation for their efforts during the city’s Red Dress Party Day, which raises awareness for HIV/AIDS and was held in December.

“Some of us out here put on drag for the better of the community. I’m not an entertainer. I do it because it just it creates attention [and] awareness,” Sisters of Perpetual Indulgence member Gert Crawford said.

Heilman, who has had several turns at the gavel since he was first elected to the City Council in 1984, praised Shyne’s performance in the role.

“It’s always a little nerve-wracking the first time you have the gavel, but she managed the meeting well,” he said, though he did point out the speed was owed in part to the lack of controversial issues on the agenda.

“We’ve always had some meetings that go relatively quickly and some which take longer than expected,” he added.

When the meeting was adjourned, Shyne noted the early end time.