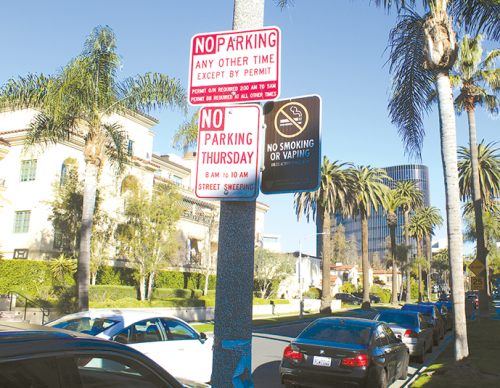 A new Beverly Hills program that allows residents to register their license plates as parking passes has gotten off to a bumpy start, with residents logging complaints. (photo by Joey Waldinger)

In November, the Beverly Hills City Council approved the Preferential Parking Permit program, which allowed residents to throw away their plastic hangtags and instead register their license plates as parking passes.

Julie Dixon, principal consultant at Dixon Resources Unlimited, which lead the implementation of the new technology, said that it would not result in any policy changes or require residents to throw away their hangtags if they were hesitant about the new system.

But the program has gotten off to a rough start. According to several residents, who spent more than an hour airing their complaints during the Jan. 24 City Council meeting, the software to register their license plates is difficult to use, resulting in delayed applications and other headaches.

Since the new system was launched early this month, only 1,500 residents have successfully registered their license plates, BHPD Sgt. David Tomlin said.

“I am totally opposed to the new parking permit system. The old system worked perfectly and it was so easy to use. … The new system is burdensome and difficult to use and full of flaws,” resident John Hiller said in a written statement. “I hope the city recognizes that they have made a mistake, and scraps the new system and keeps the old one.

Like other residents who spoke at the meeting, Hiller was dissatisfied with public outreach conducted as part of the project implementation, and frustrated that the council awarded the contract to an outside agency they said failed to deliver.

“I would like to know who hired the outside consultant and what parameters were they given to come up with this project,” Hiller said.

According to Tomlin, the department did not have sufficient time to “beta test” the registration software before rolling it out to the public.

“We were trying to get the timeline similar to what we had in the past,” Tomlin said.

He also defended Dixon’s reputation, saying she is known as one of the best traffic consultants in the country.

Because so many residents have had issues registering their license plates, Tomlin said that the department will extend the official implementation date from Feb. 1 until March 1, though the department will give leeway to residents who are struggling with the new system and will not begin issuing tickets right away.

Although the city is not going to prohibit hang tags, police are requesting that people who still plan to use one should register their license plates, Tomlin said. This way, they can hand it off to visitors who need to park on the street for short periods of time, he added.

“[March 1] is not a hard date that we’re going to start giving citations. We’ve already been given instruction by [BHPD Chief Mark Stainbrook] that, if anything, we’ll start giving warning signs,” Tomlin said. “If he needs to do that for a week, two weeks, a month, he doesn’t care. We want everyone registered in the system. That’s the goal.”

Mayor Lili Bosse said that she is committed to improving the process to make it easier for residents.

“I want us to also provide the white glove service for residents so that they don’t have to spend so many hours of their time trying to learn it,” Bosse said.

As a Beverly Hills resident, I am very unhappy with the new parking permit plan. They made it much more complicated to provide temporary permits to our guests and those we employ to help us. The old system worked beautifully. Your article did not fully explain what problems were trying to be “fixed” and the amount of money that was spent and continues to be spent tryin to change a working system.