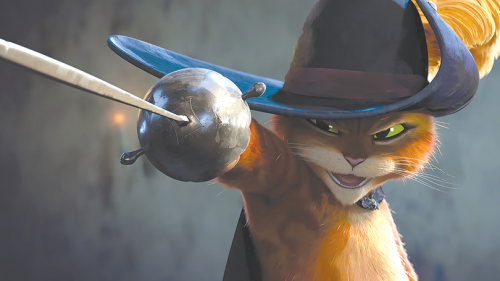 The gallant feline is back in “Puss in Boots: The Last Wish.” (photo courtesy of Universal Pictures)

Without a whiff of exaggeration, no trace of hyperbole, I confidently say “Puss in Boots: The Last Wish” is the best film in wide release right now. Perhaps that will change soon, but for now, it’s the top dog – cat actually – far better than those Braveheart Smurfs swimming around.

Beautifully animated, executed flawlessly, it’s one of the best DreamWorks Animation features and the best of all the “Shrek” offerings. It shouldn’t be this good. But it most certainly is.

The “Shrek” flicks always enjoyed a few jokes for the adults, present against their personal preferences. Recall Mike Myers’ Shrek asking what Lord Farquaad’s castle size compensated for (and Farquaad sure sounds similar to, well, you know).

Sleight crude jokes take a backseat to some darker bits this time around. After Puss (Antonio Banderas voicing the swashbuckling gato across five films and nearly 10 specials) dies for the eighth time saving the day, he realizes his ninth life will be his last.

That realization isn’t immediate, but thrust upon him when he encounters a wolf (Wagner Moura) ready to put him down for good. The first bout is shockingly haunting for an animated feature for kids. And a host of other deaths grace the screen as well, either played for laughs or inferred. So like other “Shrek” flicks, adults will notice, but the littles might not. (Do with that as you please.)

Traumatized by the brush – much like some young viewers, I’m sure – Puss tries to lay low with a cat lady haven where he meets a nameless aspiring support dog (Harvey Guillén from “What We Do in the Shadows”).

Soon enough, Puss catches wind of a magical object that can grant him another nine lives. But he ain’t the only one in hot pursuit. There’s Goldilocks (Florence Pugh) and her bear family, all clumsy but adept criminals. More murderous, Jack Horner (John Mulaney), no longer going by “Little Jack Horner,” loves himself some magical relics, along with putting his thumb in pies to pull out plums.

But those baddies got nothin’ on Kitty Softpaws (Salma Hayek), Puss’ former foe-turned-lover-turned-will-they-won’t-they. They all want the same thing, that one wish to make their lives complete. I wonder how it’ll turn out.

Ignore previews. They only dance around “Wish’s” best parts. But they do capture one promising divergence from previous “Shrek” films. The animation is strong, especially compared to the concerning slips into the uncanny valley in the old green ogre days. But what stands out most is one visual choice that accents key moments.

In what director Joel Crawford calls “a fairytale painting” style, these sequences break from the film’s standard animation, shifting to something like a moving canvas simulating a decreased frame rate. When they occur, characters erupt from their surroundings, displaced from reality. It’s one of the most unique CGIs of the year.

Beyond high-end craft on display, the comedy is also top tier. The newest character, a dog voiced by Guillén, works so well, clashing with Puss and Kitty’s hardened souls. He’s at the center of the best jokes and gags.

And Goldilocks is another splendid addition, hardly a generic antagonist without much else going on. Frankly, “The Last Wish” should serve as a master class for other films on how to handle conflict. Introduce sympathetic foes. It shouldn’t be that hard.

The ending sets up the possibility for more adventures, but this a good place to stop. It won’t get better than this. It’s been more than a decade since anything “Shrek” has premiered as more than TV fodder. But this one provides a promising thesis for how to successfully revive and thrive.

Pastrami or Reuben? It’s your choice on National Pastrami Day