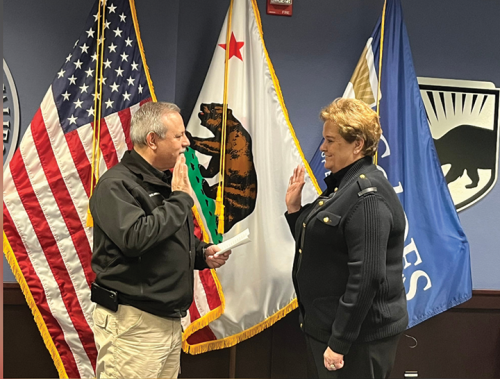 Nancy Ward was sworn in as new director of California Office of Emergency Services. (photo courtesy of CAL OES)

Emergency response professional Nancy Ward has been appointed director of the California Governor’s Office of Emergency Services, the first woman to hold the position.

“Nancy Ward is a seasoned emergency response veteran with decades of experience at the local, state and federal level. Under her leadership, California will remain ready to respond, no matter the crisis, keeping the safety of Californians at the forefront. I thank her for taking on this role and her dedication to serving the people of California,” Gov. Gavin Newsom said.

Ward has been a retired annuitant at CAL OES since 2017, where she served as chief deputy director and department of homeland security advisor from 2014 to 2017.

Prior to that, she was Federal Emergency Management Agency response and recovery division director from 2000-2006, and was a regional administrator from 2006-2014. In 2009, Ward served as FEMA’s acting administrator within the U.S. Department of Homeland Security.

Former CAL OES director Mark Ghilarducci announced his retirement at the end of 2021.

“Nancy Ward is an outstanding choice to lead the Governor’s Office of Emergency Services. Nancy is an exceptional emergency manager and skillful leader who brings strong relationships and years of deep experience,” Ghilarducci said. “I am beyond confident she will provide continued strong engagement with our public and private sector partners, and will ensure our state remains ready and prepared for any number of emergencies or disasters.”

The Wallis welcomes ‘Wuthering Heights’ to the Goldsmith Theater