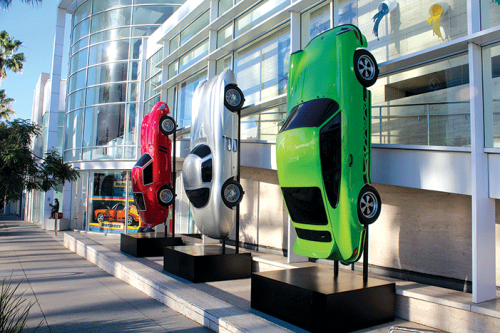 When Thierry Guetta, now known as Mr. Brainwash, set out to document the life of his cousin, Parisian street artist Space Invader in 1999, he had no intention of becoming an artist himself.

As Guetta dove deeper into the world of street art, he began to not only film his subjects, but to emulate them. With the encouragement of legendary street artist Banksy, Guetta held his debut art show, “Life is Beautiful,” in Los Angeles in 2008, instantly garnering widespread acclaim.

Working as Mr. Brainwash, Guetta has gone on to cultivate one of the most successful careers in contemporary art. With the Mr. Brainwash Art Museum at 465 N. Beverly Drive, he has chosen Beverly Hills as the launch pad for his newest venture, a series of temporary museums installed across the world.

The museum launched in December, and Guetta plans to remain in the space for approximately a year before choosing a new location, a museum official said. The museum is open to patrons every Thursday and Sunday, but during Business with Bosse on Jan. 26, Guetta will lead a free tour of the new exhibition.

“To actually have the artist be there and give all of us a firsthand glimpse into what he was thinking with all of the pieces that we are going to get to enjoy together, it’s a very rare opportunity,” Mayor Lili Bosse said. “Everybody is invited, and I think it will be a wonderful community experience to actually be with him and see it firsthand. It is a once in a lifetime opportunity.” Following his “Life is Beautiful” art show, Guetta premiered “Exit Through the Gift Shop,” which chronicles the world of street art and his artistic genesis, at the Sundance Film Festival in 2010, which went on to win Best Documentary at the Independent Spirit Awards that year.

Since then, Guetta has hosted exhibitions acround the world and created commissions for some of the world’s most influential celebrities and brands, including designing the album cover for Michael Jackson’s posthumous album, “Xscape,” in 2014, and painting a mural of L.A. Clippers star Kawhi Leonard in Los Angeles in 2019.

Filled with the vibrant multi-media works and blending of historical and pop iconography for which Mr. Brainwash has become famous, the museum immerses guests in his artistic vision.

“When you go to this museum you can’t help have a fun experience,” Bosse said.

As the only place in the world showcasing Mr. Brainwash’s art, the museum will bring new life to the building that once housed the Paley Center for Media, creating an additional draw for visitors and residents alike, Bosse said.

“I think it’s wonderful to have that space repurposed with something that I know will bring a lot of joy to the community,” Bosse said. “After visitors have experienced our museum, they can experience our wonderful restaurants and parks. It will be another reason why Beverly Hills is so special.”

The museum is located in one of the addresses that will comprise the Cheval Blanc project, but Beverly Hills officials said that a museum is not part of the development’s design.

“We are pleased that the Mr. Brainwash Museum is currently occupying this space and offering a unique experience for its visitors,” director of community development Timothea Tway said.