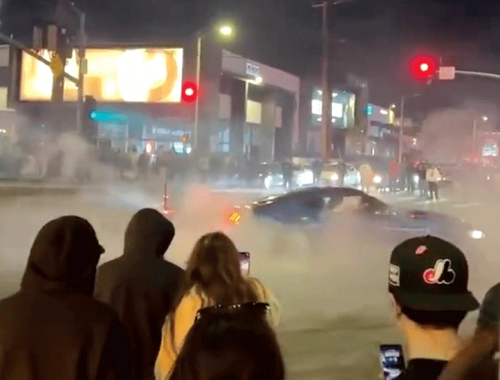 Dozens of drivers and spectators blocked La Cienega Boulevard and Third Street on Jan. 7 during a street takeover in which cars did doughnuts around a Christmas tree lit on fire in the middle of the intersection.

A video posted on social media showed cars with engines revving and tires spinning veering dangerously close to spectators standing in the street, filming and watching the vehicles performing stunts.

The street takeover was the latest in a long series of similar illegal vehicle sideshows that have occurred throughout the area, including in Beverly Hills, Hollywood and the Melrose area. The city of Beverly Hills is looking into the feasibility of implementing an ordinance that would allow for the forfeiture of vehicles involved in street takeovers.

During the Jan. 7 street takeover near the Beverly Center, which occurred in Los Angeles just outside the Beverly Hills border, police received calls around 10 p.m. and patrol officers also came across the takeover as it was happening, said Capt. Sonia Monico, of the Los Angeles Police Department’s Wilshire Division. The crowd rapidly dispersed when officers arrived, she added.

“There were no reports of any injuries and no arrests were made,” Monico said. “The West Traffic Division was made aware of it and we’ll see if they can use video to get a license plate. These things are very spontaneous and it’s hard to predict where they are going to happen. We try to get ahead of it, but we had no idea this one would be occurring.”

Monico was referring to efforts to curb street takeovers by the LAPD’s Street Racing Task Force, a specialized unit assigned to address the problem. Police believe street takeovers are organized via social media, with large numbers of people who do not necessarily know each sharing information about meeting at a particular location. The task force monitors social media for information that indicates a street takeover may occur in a particular place and deploys officers so they can be in place to proactively address The pre-deployment tactic has enabled the LAPD to make arrests and impound vehicles. During the first nine months of 2022, police issued more than 670 citations and impounded more than 450 vehicles during street takeovers, LAPD Chief Michel Moore told the Los Angeles Police Commission last September.

The LAPD has proposed additional measures to address the problem, such potentially having vehicles forfeited by owners if they are involved in repeated offenses. The Los Angeles City Council approved a motion by Councilmembers John Lee and Monica Rodriguez on Oct. 21 calling for a report back from the LAPD and Los Angeles Department of Transportation on what is being done to better address street takeovers and what additional measures could potentially be taken. The council has not yet reconsidered the motion, and it is unclear whether a report has been received or when it may be considered by the council.

Councilwoman Katy Young Yaroslavsky, 5th District, said she is concerned about street takeovers, and is planning to work with the LAPD to make sure the department has the tools necessary to address them.

“These street takeovers are extremely dangerous and life threatening, and they impose a tremendous burden on the families of Council District Five who are forced to live with the noise and traffic delays that they cause,” Yaroslavsky said.

Beverly Hills is considering adopting a law that would seize vehicles if drivers are involved in street takeovers.

Melrose Action, a community-based nonprofit working to address crime and quality of life issues in the Melrose area, posted video of the Jan. 7 sideshow at Third Street and La Cienega Boulevard on its website. Peter Nichols, co-founder of Melrose Action, declined to say who provided the video, stating that is was a community member who wished to remain anonymous who happened to be in the area. He added that street takeovers have been a vexing problem in the Melrose community and surrounding area, and wishes more could be done.

“They do happen frequently,” he said. “It’s head-scratching to me that this illegal activity keeps going on unchecked.” the situation. The task force primarily works on weekends, when the street takeovers generally occur. Representatives of the task force could not be reached for comment.