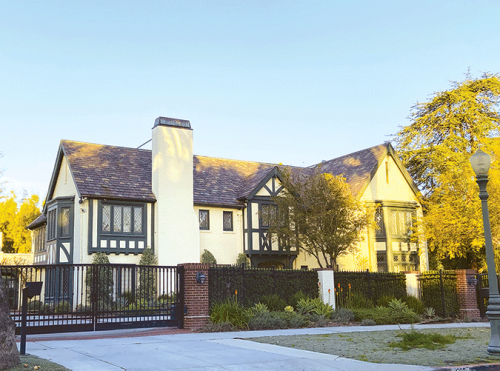 Getty House in Windsor Square has served as the official residence of the mayor of Los Angeles since 1977. (photo by Edwin Folven)

Windsor Square, a neighborhood characterized by gated mansions and tree-lined residential streets, has a new resident.

A spokesperson for Mayor Karen Bass said she moved into Getty House, the official residence of the mayor of Los Angeles, during the “Christmas break” and will live there while in office. The mayor joins other former city leaders who have called the mansion at 605 S. Irving Blvd. home, including the past two mayors, Eric Garcetti and Antonio Villaraigosa, as well as the late Mayor Tom Bradley.

Getty House, built in 1921, has also been home to other prominent residents. It was constructed for wealthy Swedish immigrants Leta and Paul Paulson in what at the time was the newly subdivided residential neighborhood of Windsor Square, according to the Getty House Foundation. The Tudor revival-style home was designed by Phillip W. Holler and Mendel S. Meyer, of the Milwaukee Building Company, which also designed Grauman’s Chinese Theatre and Egyptian Theatre, and other landmarks such as the First National Bank of Hollywood. The home was purchased in 1928 by Jeanne and Leslie Lockhart, who added a basement lounge and expanded the house and lot size, according to the foundation. The Lockharts rented the house in the 1940s and 1950s to the families of movie stars John Barrymore and Dolores Costello.

The house was purchased in 1958 by the Getty Oil Company, which was headquartered at the time along Wilshire Boulevard near Western Avenue. The company envisioned a sprawling new corporate complex between Sixth Street and Wilshire Boulevard and planned to remove some of the “The neighbors didn’t like the idea of all those mansions being torn down, so Getty gave up and later donated the property to the city,” he added.

The Getty Oil Company gifted the house to the city in 1977 with the stipulation that it serve as the official residence of the mayor of Los Angeles. The home was named after J. Paul Getty’s son George F. Getty II, who previously lived at the house, according to the foundation. Bradley became the first mayor to live in the residence, residing there with his wife Ethel from 1977-93.

The Getty House Foundation was founded by Nancy Daly, wife of former Mayor Richard Riordan. It raised funds to renovate the mansion, which was damaged in the 1994 Northridge earthquake and needed upgrades. The restoration was completed in 1995. Riordan did not live in Getty House but held special events there, as well as educational tours for students, according to the foundation. Riordan’s successor, James K. Hahn, also did not live in Getty House during his tenure as mayor.

Villaraigosa and Garcetti lived in the mansion and hosted public and private events. Villaraigosa installed the first drought-tolerant landscaping, according to the foundation. Garcetti expanded public access with three event series at the home, and established a sustainability plan to better preserve the home’s gardens.

Bass’ spokesperson did not respond to further questions about her moving into Getty House. The mayor traveled to Washington, D.C., this week for the United States Conference of Mayors’ Winter Meeting, which runs through Jan. 20.

Having the mayor’s official residence in their neighborhood is a source of pride for many, including Cindy Chvatal-Keane, president of the Hancock Park Homeowners Association.

“I would say it’s historic. [Getty House] is an important part of the fabric of our community,” Chvatal Keane said.

Suz Landay, who has lived in the 600 block of South Irving Boulevard since the 1970s when Bradley resided in Getty House, said each of the home’s occupants have been very respectful of their neighbors. Occasional protests and demonstrations are held in front of Getty House, but otherwise the neighborhood has always been quiet, she said. Landay, a longtime member of the Windsor Square-Hancock Park Historical Society, donated a small amount of money to remodel a foot stool in Getty House during the renovation project in mid-1990s, and said many others in the surrounding neighborhood also contributed. She has not yet met with Bass but hopes to soon, and volunteered to host an introductory meeting with neighbors if the mayor so desires.

“What’s significant about Getty House is it looks like a very nice traditional modern house. Nothing about it looks like it was built in 1920,” Landay said. “I’m pleased that she has moved in. We heard she was going to and saw the moving trucks. I think she has been very nice and I look forward to meeting her.” stately homes in the area, said Richard Battaglia, president of the Windsor Square-Hancock Park Historical Society.

She got a house. We are all still homeless but she got a house. They, the politicians get everything they need to nothing we want, need ir asked for. We need emergency housing. They cant figure out how. But it hasn’t dawned on them to buy residential properties instead of hoping a nice and kind developer comes by and builds some affordable housing. Affordable Housing comes from affordable rents based on income not the CPI which the guide if how much we spend. Rent Control is needed because all the landlords do is find any and all ways to raise rents no matter the law no matter the market no matter the national crisis. We as tenants dont matter at all to today’s landlords its PROFIT OVER THE PEOPLE AT ANY COST

I’m happy to hear Mayor Bass has moved in and wish her much happiness in her new home.