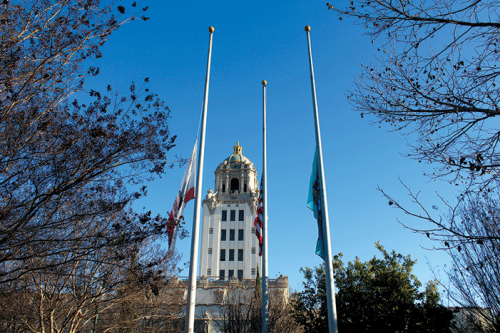 The city of Beverly Hills lowered its flags to half-staff in honor of the victims of the mass shooting in Monterey Park. (photo by Joey Waldinger)

Last summer, JR Dzubak and Yvonne Ng – presidents of the Rotary Club of Beverly Hills and Monterey Park Rotary Club, respectively – decided to hold a Lunar New Year celebration in Beverly Hills, which they envisioned as an opportunity to share the holiday’s rich cultural traditions.

After a gunman opened fire in a Monterey Park dance studio on Jan. 21, killing 11, the organizers wondered whether they should call off the celebration. Ultimately, they decided to go forward, hosting approximately 125 people for a party at the Beverly Hills Hotel on Jan. 23, Ng said.

She added that as the Year of the Rabbit began, they wanted to focus not on tragedy but on what the rabbit symbolizes: longevity, peace and prosperity.

“We wanted to acknowledge the fact that it happened, but by the same token it was not going to be representative of this new Lunar New Year,” Ng said. “We talked about what had happened and we gave a moment of silence for the families and [community members] that were impacted by the senseless violence, but we wanted to focus specifically on the peace aspect.”

The mood in the dining room at the hotel was one of celebration, as people of all ages gathered to ring in a new year, she added.

Beverly Hills City Councilwoman Sharona Nazarian, who led a moment of silence, called the gathering a “beautiful event” that demonstrated how kindness had brought the two communities together.

“As we mourned, we also celebrated. We must celebrate the love and unity that exists in our community, and the strength shown in the face of adversity,” Nazarian said. The Immortals, a dance troupe with ties to Monterey Park, performed and explained the significance of Lunar New Year traditions, Ng said. As they danced, working in teams to maneuver elaborate red and gold costumes around the room, attendees handed them red envelopes, a tradition meant to ensure luck in the new year.

Such sharing of traditions was the exact blend of eastern and western cultures that Dzubak and Ng envisioned when they first planned the party.

“Coming together was a chance for our communities to have empathy and compassion, and of course to honor the rich culture [of Lunar New Year] but also to support one another,” Dzubak added.

After the tragedy on Jan. 21, support poured in from service organizations like the Rotary chapters and from elected officials across the nation, who denounced the killings and vowed to stop further acts of violence.

The city of Beverly Hills lowered its flags to half-staff in recognition of the tragedy, and Mayor Lili Bosse started the Jan. 24 City Council meeting with a moment of silence.

“Our council and our community really need to take a few moments and reflect on the past few days,” Bosse said. “People were just hoping to celebrate the Lunar New Year, and 11 people were tragically killed. Our community, our council, everybody mourns together. We as a city lowered our flag in memory of the families that are grieving.”

“The reports coming out of Monterey Park are absolutely devastating,” she said. “Families deserve to celebrate the holidays in peace – mass shootings and gun violence are a plague on our communities. My heart goes out to Monterey Park and the families and friends of those lost.”

“The city would like to express its outrage and sadness at this weekend’s deadly mass shooting,” Shyne said. “The city has lowered its flags to half-staff as a mark of respect for the victims. My heart goes out to each of the victims and their loved ones. Monterey Park is a beautiful city with a thriving AAPI community. I’m sad and shocked that the community had to endure such hateful violence and domestic violence during what was supposed to be a time … filled with love and joy.”

The Stonewall Democratic Club president Alex Mohajer also highlighted the perceived racism at the root of the shooting, as well as to the accessibility of guns in America.

“Stonewall recognizes that our Asian American friends and neighbors continue to be the target of a shocking increase in hate-related incidents over the past few years,” Mohajer said. “We also know that even here in California, cart blanche access to these weapons of destruction creates the perfect storm for these types of tragedies to take place. Hatred against the Asian American community is hatred against the LGBTQ+ community, period. We stand with our AANPHI members and community during this time, and renew our calls for comprehensive gun control legislation at all levels of government.”

U.S. Rep. Adam Schiff, who formerly represented Monterey Park, called for a full investigation into the killings and called out Senate Republicans for failing to pass gun control legislation that had cleared the House of Representatives.

“As a country, we have once again awoken to the horrific news that one of our communities has fallen victim to the needless despair of gun violence. I am heartbroken for the people of Monterey Park, a community I once had the honor to represent, and the families and friends of the victims,” Schiff said. “Mass shootings are a uniquely American problem, made possible by gutless politicians who have allowed the unfettered flow of weapons of war into our streets and have abandoned their responsibility to value the life of individuals over the interests of the gun industry. We will never stop fighting for communities like Parkland, Newton, Charlottesville, Uvalde and now Monterey Park. This madness must stop.”

Businesses, including the Original Farmers Market, also voiced their support for the victims.

“We stand united with the Monterey Park community as we mourn the victims from the unimaginable attack on Saturday,” read a statement from the market.

As Monterey Park residents move forward from the tragedy, Rotarians will continue to offer their support, Ng said. As with the party at the Beverly Hills Hotel, a Lunar New Year gathering on Jan. 26 with the Boys and Girls Club of West San Gabriel Valley and Eastside will allow residents to acknowledge and memorialize the tragedy while still celebrating the joy of a new year, she added.

By coming together to disavow violence and create closeness between the two communities, the Beverly Hills and Monterey Park Rotary Clubs provided residents a space where they could share their feelings and begin to heal, Dzubak said.

“This was an opportunity to embrace one another, to hug each other and give comfort,” Dzubak added.