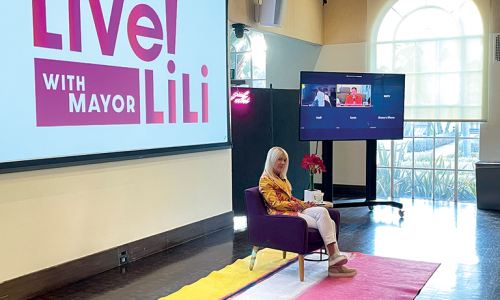 The Cheval Blanc project, diversity initiatives and new community leadership roles were among the topics discussed by Mayor Lili Bosse at the first Live with Lili of the year. (photo courtesy of city of Beverly Hills)

During the first Live with Lili of 2023, Beverly Hills Mayor Lili Bosse said the City Council will discuss the results of two petitions opposing the development of the mixed-use luxury Cheval Blanc project on Jan. 24.

“Our city clerk will be … sharing with the council and the community the results of the petition gathering, and … we’ll go from there,” Bosse said.

The update followed a question from an associate of the Greater Los Angeles Association of Realtors, who asked for additional information about the project, and if the mayor “is confident” it will go forward.

One of Bosse’s signature initiatives as mayor, Live with Lili is a monthly forum at City Hall where community members interact with the mayor, asking questions about various programs and sharing concerns or ideas for improving civic life. Although a winter storm on Jan. 9 impacted attendance, a handful of residents braved the weather to share their thoughts.

Following a suggestion from a resident that the city establish an innovations director, Bosse said that city manager Nancy Hunt-Coffey is considering the new position as she establishes a leadership team for the city.

“Nancy very much said that she appreciates the suggestion, and is going to take this wonderful suggestion under consideration, and we’ll be working towards it with the leadership team,” Bosse said.

A resident asked if the city could organize more programs around race relations.

Over the summer, the Human Relations Commission and other city organizations hosted a conversation with Donzaleigh Abernathy, the daughter of a prominent civil rights activist, as part of the its diversity, equity and inclusion initiative, commission chair Noelle Freeman said. She added that the commission is organizing similar events.

On Feb. 9 at 7 p.m., the commission is hosting a women’s panel, where six women from different backgrounds will discuss the state of women’s rights in modern society, Freeman said.

After receiving a robo-call informing him of the upcoming Golden Globes, resident Steve Mayer wondered if the city could use robo-calls more frequently to keep residents informed of other events.

Deputy city manager Keith Sterling said that the city needs to walk a fine line when deciding if they should send out robo-calls, as officials have previously received feedback that residents don’t like receiving them except for emergencies.

He added that residents who sign up to receive alerts from the city can choose what kind of alerts they receive. To sign up, visit beverlyhills.org/emergencymanagement.

Another resident wondered if the city could give “embrace civility awards” every month, rather than once a year.

Freeman said the commission decided that giving out the award once a year makes it more special, but she added that the commission will consider ways to recognize to exemplary community members more often.

WeHo gives back for MLK Day