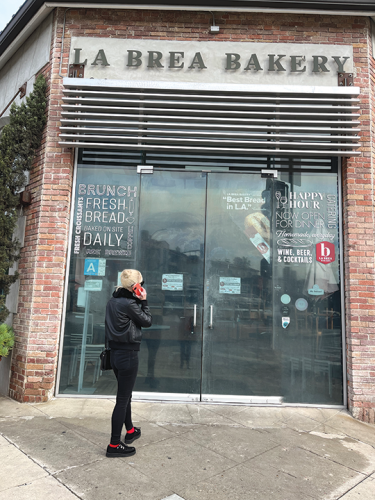 On Wednesday, Jan. 11, a woman approached the entrance only to learn of the restaurant’s closure. (photo by Karen Villalpando)

A stalwart business of its namesake street, the La Brea Bakery restaurant closed its doors on Jan. 9. Co-founded by Nancy Silverton, the café was so successful that additional locations eventually opened, including at Downtown Disney in Anaheim. That location, too, has shuttered.

Silverton had been working for Wolfgang Puck’s Spago restaurant with then-husband Mark Peel. The couple opened Campanile restaurant and the La Brea Bakery next door in 1989. The La Brea Bakery became a national brand in 1998 after a baking facility was opened in Van Nuys that took the bread products first nationwide and later worldwide. In 2001, the company was sold to Aryzta AG, which later was renamed Aspire Bakeries. In 2003, Oprah Winfrey featured the bakery’s granola on her “Favorite Things for Spring.” Other honors poured in over the years from the likes of the Los Angeles Times and the Whole Grains Council.

According to the company’s website, locations still operate in Chicago, Reno and at JFK International Airport in New York. Products from the bakery will continue to be available in grocery stores.