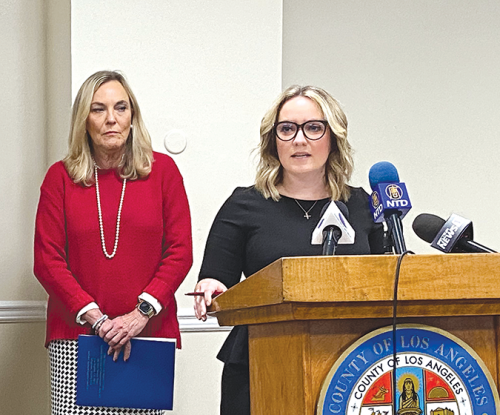 “This is a declaration of emergency on the state of homelessness in Los Angeles County, to work in partnership with the city of Los Angeles, which has already declared a state of emergency, the city of Long Beach, which has also declared a state of emergency, making sure that within the county, we are aligning all of our efforts among departments and that we are working cross jurisdictionally,” said Supervisor Lindsey Horvath, 3rd District, co-author of the motion. “We’re working with our partners in the city and our community partners to deliver the services and support that people need and expect from the county in solving this crisis. The emergency allows us to expedite processes and hiring and contracting and delivering services in ways that were not before available, whether that was through legislative restriction, or whether that was through just simply lack of coordination between the city and county and the outside partners. This effort puts us all on the same page and allows us to move in the same direction and speak with one voice.”

The motion was co-authored by Supervisor Kathryn Barger, 5th District, who said the emergency declaration increases the county’s ability to act swiftly and get people housed and connected with services. The supervisors announced the declaration at a press conference at the Kenneth Hahn Hall of Administration on Jan. 10. It is part of multiple efforts to address the crisis, and comes at a time when the county and its 88 cities are facing unprecedented numbers of individuals living on the streets.

“This is just one more tool for us to move forward, and it really is centered around the service component,” Barger said. “This is for urgency. When Mayor Bass declared a state of emergency, we saw this as an opportunity for us to also swim in the same direction and work together and coordinate.”

Bass was encouraged that the county’s emergency declaration will help address the homelessness crisis.

“I want to thank Supervisor Horvath, Supervisor Barger and the entire board of supervisors for unanimously locking arms between the county and the city by declaring an emergency on the homelessness crisis,” Bass said. “The people of Los Angeles deserve that we urgently and immediately take every possible action to bring unhoused Angelenos indoors, and this declaration will enable us to move faster and unlock every tool possible. I look forward to a continued and close working relationship with the board and the county as we confront this crisis together, head on.”