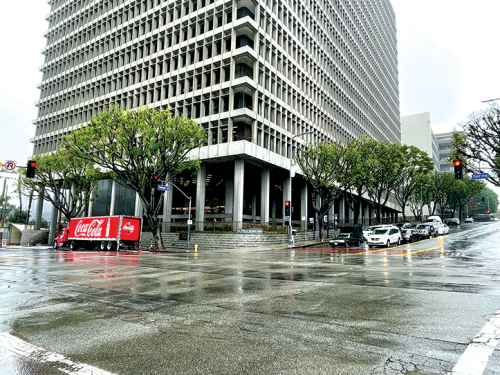 Adam Friedman, the son of Beverly Hills City Councilman Lester Friedman, could face trial in February for misdemeanor charges or accept a judicial diversion program at his next hearing, scheduled for Jan. 20, at the Los Angeles Superior Court. (photo by Joey Waldinger)

Unless he accepts a “judicial diversion motion” at his next pre-trial hearing, set for Jan. 20, the trial will start within 30 days of that hearing, a court clerk said.

Adam Friedman’s attorney and uncle, Leonard Friedman, and deputy district attorney R.J. Dreiling did not respond to requests for comment.

According to the legal database Justia, “A judge in the superior court in which a misdemeanor is being prosecuted may, at the judge’s discretion, and over the objection of a prosecuting attorney, offer diversion to a defendant pursuant to” several provisions.

The law further states, “If the defendant has complied with the imposed terms and conditions, at the end of the period of diversion, the judge shall dismiss the action against the defendant.”

The Jan. 4 hearing was short, with Leonard Friedman telling Los Angeles Superior Court Judge Wendy Segall his client had requested another date for the hearing. Dreiling did not object, and Segall scheduled the Jan. 20 hearing.

Eleven candidates ran for three seats on the Beverly Hills City Council in the June 7, 2022, Primary Election. Councilmen Friedman and John Mirisch won re-election, while Nazarian was elected to her first term on the council.  Nazarian secured the second highest total number of votes. They were sworn in on July 12.