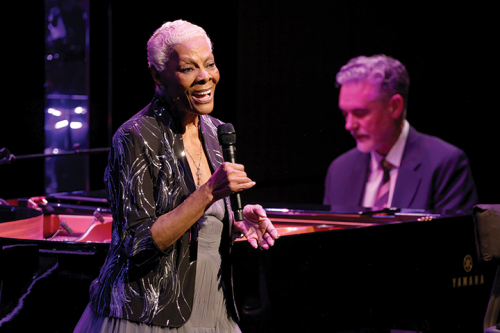 Dionne Warwick was among the performers who paid tribute to A&M Records co-founder Jerry Moss on Jan. 14. (photo courtesy of Getty Images for The Music Center)

The Music Center hosted “Live at The Music Center: Concert Celebrating Jerry Moss, Co-founder of A&M Records” in downtown Los Angeles on Jan. 14. Hosted by 16x Grammy-winner David Foster, the evening honored music industry titan and longtime patron of Los Angeles’ premier performing arts center, Jerry Moss, with performances and appreciation. Proceeds from the evening will support The Music Center’s free and low-cost programming to help ensure arts experiences are accessible for all Angelenos, a cause that has long been a passion for both Moss and his wife, Tina. In 2020, Jerry and Tina Moss provided The Music Center with the single largest gift for programming – $25 million – in the performing arts organization’s nearly 60-year history. The Music Center named its expansive outdoor plaza Jerry Moss Plaza.

“For more than five decades, Jerry shared extraordinary music with so many around the world,” Foster said. “His roster of artists included some amazingly talented individuals whose offerings were as impressive as they were diverse: Janet Jackson, Sting, Dionne Warwick, Amy Grant and so many more. Under one roof in The Music Center’s Mark Taper Forum, we needed to give to Jerry what he has given to us – the gift of music.”

The 90-minute concert featured performances by Warwick, Peter Frampton, Grant, Morgan James, Nova Payton, Joe Sumner and Darynn Dean, who took the audience through renditions of some of the most celebrated songs produced under Moss’s guidance, accompanied by The American Pops Orchestra. Warwick wowed the audience with a timeless performance of one of Moss’s favorite songs, “Alfie,” which she then dedicated to him. Frampton received a standing ovation for his performance of “Do You Feel Like We Do,” and, shortly after, Herb Alpert surprised the crowd by joining Foster onstage for an impromptu performance. With Foster on the piano, the audience joined in when the duo paid homage to another legendary A&M Records artist, Burt Bacharach, singing bits of “This Guy’s In Love With You.”

“It is an honor to celebrate Jerry Moss’s extraordinary achievements and to acknowledge how his passion and devotion to artists changed the world,” said Rachel S. Moore, president and CEO, The Music Center. “We are incredibly grateful to Jerry and his wife, Tina, for helping The Music Center make the arts more accessible and for supporting our vision to deepen the cultural lives of all Angelenos.”

“There are many reasons to honor Jerry – from his invaluable contributions to the music industry to the encouraging and nurturing actions he’s taken with artists,” Foster said. “Simply said, Jerry is a giving and generous human being, and we are all the better because of it.”

The night concluded with a celebratory dinner in the Founders Room of The Music Center’s Dorothy Chandler Pavilion. Dinner performances included Morgxn, Wendlo and Tommy Sutter.

Live at The Music Center: Concert Celebrating Jerry Moss, Co-Founder of A&M Records was produced by The Music Center, in conjunction with Nouveau Productions and Executive Producer and Co-Founder Robert Pullen, and generously supported by Bank of America. Hotel accommodations provided by Fairmont Century Plaza.

The Music Center is located at 135 N. Grand Ave.

Andy Garcia jazzes up at Catalina