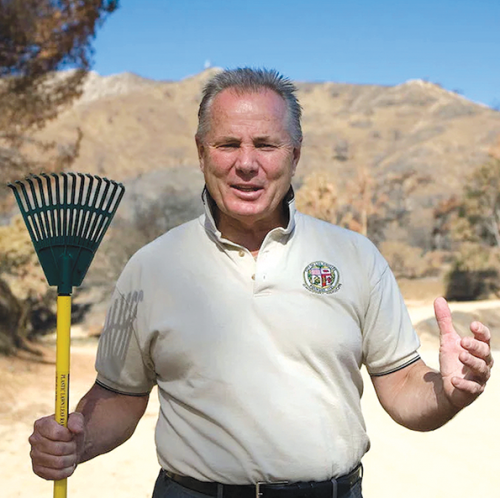 Tom LaBonge, who hiked every morning in Griffith Park, was a longtime supporter of enhancing the landscape with new trees. (photo courtesy of Brigid LaBonge)

The late former Los Angeles City Councilman Tom LaBonge hiked every morning in the hills above the Griffith Observatory and was an ardent supporter of Griffith Park.

On Saturday, Jan. 7, on the two-year anniversary of his death, friends and community members will join the LaBonge family for a memorial hike to a place in the Hollywood Hills that the former councilman loved dearly.

“We will be walking where he walked and celebrating his spirit,” said Brigid LaBonge, his wife of four decades. “We are so happy to celebrate his life in such a special way.”

The hike, which is organized by the Los Angeles Parks Foundation, will commemorate LaBonge by combining his love for hiking and his passion for planting trees, executive director Carolyn Ramsay said. Hikers will meet at the Charlie Turner Trailhead, just north of the Griffith Observatory parking lot, and proceed up the hill to the Tom LaBonge Panorama, a scenic overlook with views of the entire Los Angeles region. The space near Mount Hollywood was renamed in the late councilman’s honor shortly after his death at the age of 67 on Jan. 7, 2021. 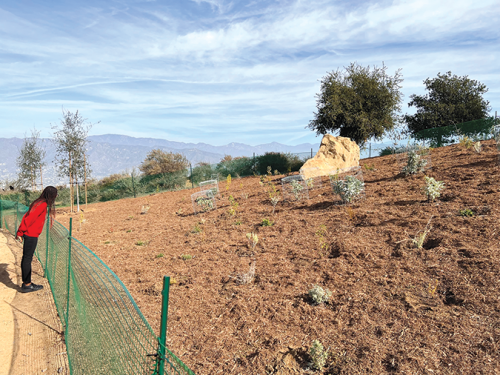 Ramsay said the hike will include a dedication ceremony for a memorial garden with native foliage that was recently planted by the L.A. Parks Foundation on a barren knoll 100 yards below the panorama. The garden was designed by Esther Margulies, professor of landscape architecture at USC. It was something the foundation wanted to do since LaBonge’s death, and it was created in coordination with the LaBonges.

“We are going to hike to the garden and do a dedication ceremony with the LaBonge family,” Ramsay said. “He hiked to this space every morning for the 20 years that I knew him. He loved Griffith Park so much, and he loved meeting people in the park. He thought it was one of the best things in Los Angeles.”

Ramsay said the plants in the garden were cultivated from seeds of plants grown throughout Griffith Park, such as white sage and coastal sage brush, making it a truly indigenous landmark. She added that LaBonge previously planted eight coast live oak trees “guerilla-style” on the knoll, and the foundation planted four additional oaks in his honor following his death. Ramsay, who formerly served as chief of staff for LaBonge, said the use of seeds cultivated in the park would have made LaBonge happy. The new plants will grow among the oaks, which will provide a shady respite for hikers along the trail.

“He would love it. It was one of his favorite places,” Ramsay added. “It will be a place for people to stop and reflect, and to enjoy the sweeping views of Los Angeles and beyond.”

LaBonge, known as “Mr. Los Angeles,” was a constant cheerleader for the city. He served the city of Los Angeles for 39 years, first working for the Los Angeles Department of Water and Power and as an advisor to former Council President John Ferraro. After Ferraro’s death in 2001, LaBonge was elected to represent the City Council’s 4th District and served until retiring in 2015. After retirement, he stayed active in the community and continued to hike in Griffith Park every day, Brigid LaBonge said.

“The beautiful thing about the garden is it’s all native plants from seeds in the park, which he would have loved,” she added. “He always wanted that plateau to be something. It’s wonderful that it will now have some more shade.”

Brigid LaBonge added that the hike will be a fitting tribute and she invited everyone who knew her husband to come along. She said he made a lasting impact on people, and a day doesn’t go by without someone telling her a story about the positive effect her husband had on them.

“It’s really beautiful,” she said. “We had been working on the garden for more than a year and we were looking for a nice way to honor Tom on the date he died. This is perfect.”

The hike, which begins at 10 a.m., is 2.5-miles roundtrip. Participants are urged to wear appropriate shoes and to bring water. The Charlie Turner Trailhead is located at 2840 W. Observatory Road. Parking will be available in the observatory lot or along the roads leading to the site. For information, visit laparksfoundation.org.

Earth, Wind and Fire drummer mourned on Walk of Fame