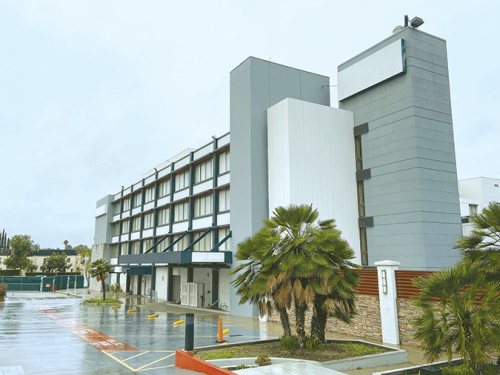 Olympia Medical Center closed in 2021 and has remained shuttered. (photo by Edwin Folven)

A little over two years ago on Dec. 31, 2020, the former owner of Olympia Medical Center, Alecto Healthcare Services, announced that it was shuttering the hospital after selling the prop­erty to UCLA Health.

Three months later at the end of March 2021, the medical center at 5900 W. Olympic Blvd. closed after serving the community since 1947, and has remained shuttered since. UCLA Health recently announced that it has selected the design, architecture, engineering and planning firm HOK and McCarthy Building Companies Inc. to renovate the facility into a neuropsychiatric hospital. Plans call for construction to potentially begin later this spring.

“UCLA Health is making a major investment to expand patient access to mental and behavioral health care and address the region’s longstanding need for additional psychiatric beds,” said Johnese Spisso, president of UCLA Health and CEO of the UCLA Hospital System, in a statement.

UCLA Health has largely remained tight-lipped, offering only a few details about the upcoming project. The University of California Board of Regents approved the project’s scope, design and financing in November. The 74 beds currently located in Stewart and Lynda Resnick Neuropsychiatric Hospital at UCLA in Westwood will be relocated to the new hospi­tal, which will have a total of 119 beds. Plans also call for 20 addi­tional observation beds to be located at the new hospital, according to a brief project description provided by UCLA Health.

The announcement about Olympia’s closure caught many people off guard. The news came amid a surge in COVID-19 cases, and many questioned whether tak­ing a medical center off-line was a Two years later, people in the area continue to remain in the dark about what is planned at the site. Greg Goldin, president of the Miracle Mile Residential Association, said he wishes there was more coordination between UCLA Health and the community.

“There’s been silence. We just don’t know,” Goldin said. “One of our immediate concerns, as a resi­dential area, is the impact it is going to have on the surrounding commu­nity. The construction is surely going to have an impact. It’s right next to the intersection of Fairfax, San Vicente and Olympic, and that intersection is a disaster. How this construction is going to proceed without having an impact on the surrounding community is the big question.”

The exact timeline for the project has not been released. Renovations of the 175,000-square-foot facility will begin in May, and the new hos­pital will open no sooner than spring 2026, according to the pro­ject description from UCLA Health.

“A critical piece to solving homelessness in Los Angeles is increasing access to quality mental health care. This project has the potential to unlock desperately needed services for Angelenos in need of psychiatric care,” Yaroslavsky said. “I applaud the investment that UCLA is making in the people of Los Angeles.”