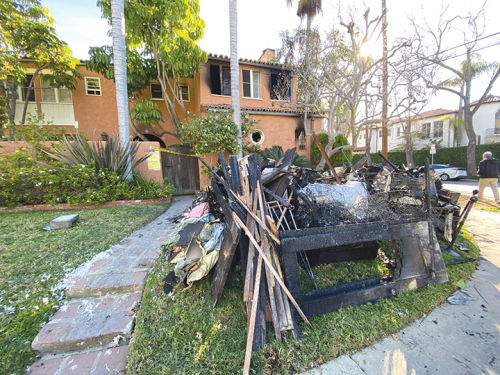 A duplex at Orange Drive and First Street remained uninhabitable after a fire damaged the structure on Jan. 22. (photo by Edwin Folven)

The Los Angeles Fire Department is investigating the cause of a blaze on Jan. 22 in a duplex at Orange Drive and First Street in Hancock Park that displaced nine people.

The fire was reported at approximately 10:15 p.m., LAFD spokesman Brian Humphrey said. Firefighters arrived to find flames and smoke coming from the first floor of the duplex at 100 and 104 N. Orange Drive. They quickly entered and made sure no people were inside. Humphrey said smoke alarms sounded and nine people evacuated the two-story building before firefighters arrived. Three of them climbed down a tree from a second-floor balcony, he added.

Firefighters extinguished the flames at 10:42 p.m. and prevented them from spreading to nearby buildings. One resident sustained minor injuries and declined medical care, he said. No further injuries were reported.

The duplex sustained significant damage and remains uninhabitable. Los Angeles Department of Building and Safety spokesman Jeff Napier said inspectors conducted “a rapid assessment” on Jan. 22 at the request of the LAFD and determined the first floor sustained moderate fire damage, and the rest of the structure sustained smoke and water damage. The building was yellow-tagged, meaning no occupancy is allowed but people can enter briefly to recover possessions.

The American Red Cross responded and provided shelter for seven students who accepted assistance. The owner and one of the students declined help from the Red Cross, he said. Humphrey added that five victims accepted $250 gift cards provided by the California Firefighters Foundation for people displaced in emergencies.

The fire appears to have started in a first-floor living room, Humphrey said, and the specific cause remains under investigation.

“Space heaters are among the many things we are looking at. We are really pushing out information about the importance of not leaving space heaters unattended, particularly during cold weather like we have been having,” Humphrey added. “In this case, it appears functioning smoke detectors also made a difference. This could have been a horrific tragedy, but thankfully everybody survived.”