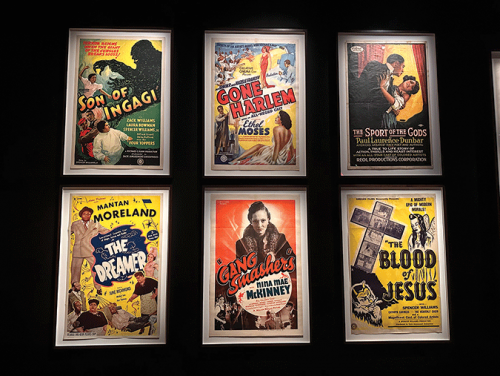 The Academy Museum has announced the extension of its Regeneration exhibit through July 16. (photo by Rance Collins)

The Academy Museum also announced the extension of Regeneration: Black Cinema 1898–1971, which will now close on July 16, and the launch of a new curriculum guide, which invites teachers and high school students to celebrate Black cinema, expand their understandings of historical context and examine the importance of telling inclusive stories. Rooted in the question, “What does Black cinema mean to you?” the curriculum features modular sections that draw from scholarship featured in both the exhibition and its catalogue. The curriculum introduces teachers to the Academy Museum’s approach to inquiry-centered learning. The guide includes select biographies of influential thinkers and filmmakers including Josephine Baker, Sidney Poitier, Madeline Anderson and James Baldwin. It also includes explorations of the exhibition’s contemporary artworks – including work by artists Glenn Ligon, Kara Walker, Gary Simmons and Theaster Gates – unique film companion pieces, topical essays exploring foundational ideas about race and film, as well as discussion questions and activities for active learning.

Additionally, throughout January and February, the museum will release original videos on its YouTube channel that serve as an expansion of Regeneration’s in-gallery experience and enable audiences to engage with the exhibition’s content from anywhere in the world. The first video features a conversation with Regeneration co-curators Doris Berger, vice president of curatorial affairs at the Academy Museum, and Rhea Combs, director of curatorial affairs at the Smithsonian’s National Portrait Gallery, along with Jacqueline Stewart, director and president of the Academy Museum, about “Something Good – Negro Kiss” (1898). This recently discovered short film is thought to be the first film to disrupt the minstrel stereotypes commonly associated with Black performances in the late 19th century by showcasing accomplished actors in smart attire engaging in mainstream pop culture satire.

“I am thrilled that the public will have an opportunity to experience the full breadth of this exhibition in such a joyful way, and that we are making resources – such as our curriculum guide, programs and Regeneration website – more accessible to everyone,” Stewart said. “The Regeneration Summit truly offers something for everyone, and I hope folks will come out to learn, share and be inspired by the legacies of these pioneering Black film artists.”

Regeneration Summit: A Celebration of Black Cinema welcomes visitors of all ages, and general admission tickets will grant visitors same-day access to all related activities – including panel conversations and screenings. General admission tickets for the museum’s exhibitions are $25 for adults, $19 for seniors (age 62+) and $15 for students (age 18+ with valid ID); free general admission for visitors 17 years of age and younger is provided by an endowment in honor of Sid Ganis. As part of the SoCal Museums Annual Free for All Day, general admission to the Academy Museum and the Summit on Sunday, Feb. 5 will be free to all visitors.