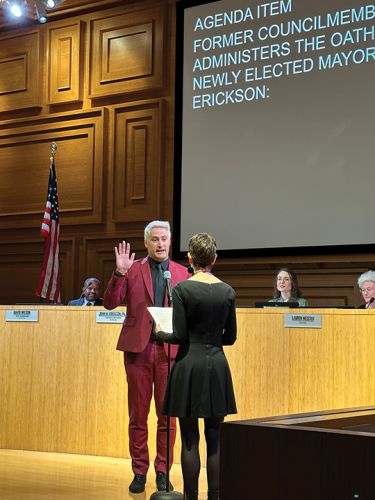 West Hollywood Mayor Pro Tempore John Erickson has been on the City Council since 2020, although he has a long history of service associated with the governing body. When he was first starting his career, he worked as Councilman John Heilman’s intern. Heilman was re-elected to the council in November, with newcomer Councilwoman Chelsea Byers. Serving alongside Mayor Sepi Shyne and Councilwoman Lauren Meister, Erickson feels confident that the new West Hollywood City Council will be effective for the city.

“It’s my job as an elected official to work with whomever the voters decide to elect onto the council,” Erickson said. “Each of us comes together with our own ideas, but we all work well on behalf of the residents and businesses of West Hollywood. I have always wanted to serve alongside someone I consider a personal hero and dear friend and that is John Heilman. Chelsea Byers was my human services commissioner and housing element taskforce appointee – and friend – prior to her time on the council and we share many similar opinions. I was also the only current member of the City Council to endorse her during her race, and I look forward to working with her, and all my colleagues, on many priority goals and initiatives we share to further benefit the community.”

Erickson said he felt like his time so far as a council member has uniquely prepared him for the second-in-command role.

“The last two years on the City Council have seen the city grow, face new obstacles and overcome challenges still remaining from the COVID-19 pandemic as well as longstanding issues that the council righted with new policies,” he said. “Having worked at the city for six years prior to my time on council, I already knew how the city worked and it was great to grow in this new role and now, step into the role as mayor pro tempore and continue to push and fight for progress at all levels.”

Like Shyne, Erickson sees monitoring business recovery after the pandemic as a key issue. He also wants to work to fund the WeHo Care Team mobile crisis unit, which was created by a motion co-authored by Erickson and Shyne, and work to create “safer and slower streets,” and improving and creating transparency around public safety.

Erickson expressed excitement to work with Shyne in his new role.

“Mayor Shyne is a trailblazer,” he said. “At a time when we see historic momentum going on to further democracy in Iran, Mayor Shyne is leading that charge. She is the first LGBTQ Iranian elected official in the world and West Hollywood gets to call her their first woman of color mayor, if that doesn’t say trailblazer, I don’t know what does. On a personal level, Mayor Shyne is a very close friend. It’s a joy to see her shine. She’s earned it.”

Issues that Erickson said he feels proudest of tackling in his first two years on the council include increasing the minimum wage and expanding rent protections.

“As a renter, I know how frustrating it can be to deal with landlord and tenant harassment, so these protections that we codified further support our renters. Additionally, I know what it’s like to work a minimum wage job, and having that ability to now say we have the highest minimum wage protections in the county, alongside sick and vacation time, is something I’m proud of for our community,” he said.

These issues help to illustrate what Erickson sees as the description of the city.

“West Hollywood is equal parts party and protest,” he said, quoting the city’s poet laureate Brian Sonia-Wallace. “It’s an immense honor to serve the city of West Hollywood as the mayor pro tempore. I’m thankful to my colleagues for voting me in and look forward to working on behalf of our residents and businesses over the next year.”