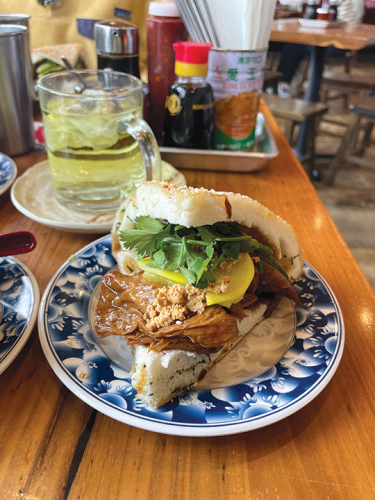 A few years ago, I wrote a review about Vivian Ku’s quick-and-casual restaurant Pine and Crane in Silverlake. I mentioned how much I enjoyed the classic Chinese and Taiwanese dishes using fresh ingredients from her family’s farm in Bakersfield.

The Ku farm has supplied Asian markets in Southern California with produce for over 25 years. With the success of Pine and Crane, Ku opened JOY, a street-style Taiwanese casual restaurant, in 2018.

To kick off the new year, I was eager to introduce my daughter to JOY, since she previously lived in China and Taiwan. I hoped she would appreciate the authentic flavors of the different dishes offered on the menu.

The restaurant is popular and lines can be long, so we arrived before it opened at noon to be one of the first inside. Walking up to the counter, I ordered a JOY Combo offering four different items for $16. It’s a great value and includes a choice of a cold appetizer, choice of soup, a sandwich and shaken iced green or black tea.

My daughter ordered an appetizer, soup, Dan Dan noodles, hot tea and dessert a la carte. She urged me to order the wood ear mushrooms for my appetizer, as she ordered the crunchy bamboo shoots.

From our table near a window, I noticed a line forming outside. A friendly and thoughtful staff member walked out with a tray with cups of hot tea for waiting guests.

The bamboo shoots arrived in a brown glaze and the shoots had a nice crunch and slight corn flavor. Next, we enjoyed the wood ear mushrooms. The popular smooth and dark fungi is featured in a lot of Chinese dishes for its mild and slightly earthy essence.

Two soups were delivered in pretty bowls with Chinese designs. One was filled with an orange and velvety vegan squash soup, and the other had five large shrimp wontons floating in clear broth with cut scallions and soft Chinese cabbage bok choy bulbs.

My eyes widened when the scallion sesame bread sandwich in my combo meal arrived. It was filled with braised bean curd and mushrooms in a heavenly soy glaze. The lightly colored house-baked bread was crunchy on the outside and soft inside. In between was a layer of cilantro and bright yellow pickled daikon radish slices. As I picked up the sandwich, fresh sesame seeds covered my fingertips. They bake the bread daily and sell it by the loaf for guests to bring home to make their own favorite sandwiches.

When my daughter’s Dan Dan noodles arrived, I learned that the perfectly cooked long noodles are popular because their length represents longevity. The noodles were served in a pleasing sesame and peanut sauce, and topped with long matchstick-like cucumber slices, chopped peanuts and cilantro.

We watched guests near our table blissfully bite into a thousand layer pancake, another popular dish in Taipei made and served at the night markets. At JOY, it can be ordered plain or filled with egg, cheese or both.

When my daughter ordered the traditional shaved ice, she was given a card that had the character Bing on it. Bing in Mandarin means ice and she was instructed to insert the card into the metal stand on our table when she was ready for dessert. Within minutes of displaying Bing, a large bowl filled with shaved ice was delivered on a metal tray with two smaller bowls. One bowl held soft sweet potato and taro, while the other had around 20 black boba pearls. This is one of the most popular desserts throughout Taiwan. The ice was crunchy, not powdery, and topped with condensed milk, sweet red beans and large black grass jelly squares that looked and tasted like Jell-O. We couldn’t finish the dessert because it is large enough for three to four people to share.

Other desserts on the menu include fresh fruit shaved ice, forbidden rice pudding in coconut milk with sweet potato and taro balls, Hakka mochi with peanut and black sesame, and Mexican wedding cookies.

JOY occupies the former space of Elsa Bakery, a longstanding bakery in Highland Park. Wu wanted to pay homage to the family that owned the bakery and its location and so she bakes Mexican wedding cookies daily and donates the profits from sales to charity. 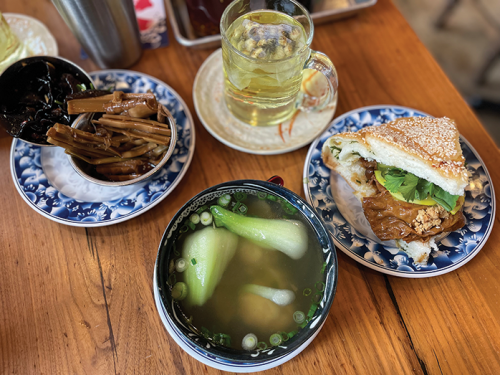 2022’s best, weirdest, most off-the-wall moments on any screen