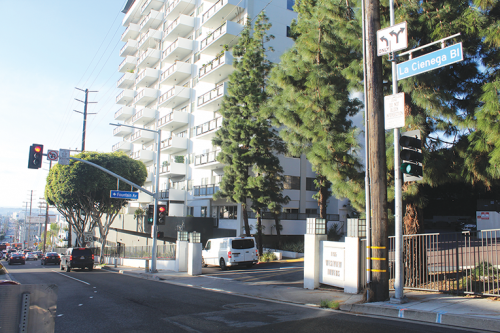 One of the robberies occurred on Jan. 14 on La Cienega Boulevard near Fountain Avenue. Two men allegedly stole a victim’s wallet. (photo by Joey Waldinger)

Investigators with the West Hollywood Sheriff’s Station are seeking information about three street robberies that occurred overnight on Jan. 13-14, and are trying to determine if the crimes are related.

All three of the robberies involved a suspect or suspects who approached on foot and demanded property from victims. A victim’s wallet was stolen in one instance, and phones were taken from victims during the other two robberies.

The first robbery occurred around 9 p.m. near the corner of Fairfax Avenue and Ogden Drive. A Black male suspect approached a victim and demanded his phone, said Sgt. Jason Duron, with the West Hollywood Sheriff’s Station’s detective unit. The victim complied and the suspect fled on foot. The victim later reported the robbery at the sheriff’s station. Deputies searched the area and were unable to locate the suspect.

Another incident occurred around 2:10 a.m.. A victim flagged down deputies near Doheny Drive and Phyllis Street, just south of Sunset Boulevard, and told them a male suspect had stolen his phone. The victim said he was talking on the phone when a man walked up, shoved him to the ground and stole his phone, Duron said. The victim was “vague” about the suspect’s description, only stating that the assailant was white, Duron added.

The third incident occurred around 2:20 a.m. on La Cienega Boulevard, between Sunset Boulevard and Fountain Avenue. A victim reported that he was approached by two Hispanic men who demanded his wallet. The victim complied and the suspects fled on foot.

Duron said although the suspects’ descriptions varied, they may be part of a crew working together and targeting different victims, which is something detectives will investigate. Police believe the robberies may be connected because the method of operation was similar in each instance, Duron added.

“It was a busy night for us,” he said. “None of these had witnesses, so if anybody saw anything, we ask them to call the station.”