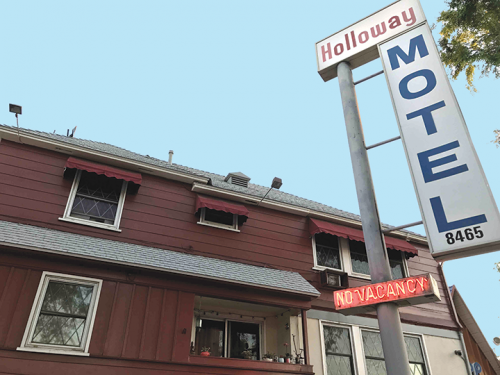 A two-sided billboard atop the Holloway Motel will provide shared revenue for the city and the seller. (Beverly Press file photo)

In June 2022, the West Hollywood City Council directed the city to purchase the Holloway Motel, located at 8465 Santa Monica Blvd., using funds from a more than $6 million grant to create space for homeless housing and services.

The structure, constructed in 1954, is below a tall single-sided billboard. As part of the purchase terms, the city agreed to convert and renovate the sign into a two-sided billboard. The motel’s previous owner was granted an easement for the operation and leasing of the new sign, and the seller and city will enter into a 30-year revenue agreement, with 30% of the money generated by the sign marked to go to the city.

The logistics behind the billboard’s replacement and renewal were considered and approved by the City Council on Jan. 24. Councilman John Heilman voluntarily recused himself from the agenda item owing to his home being within 500 feet of the property.

Councilwoman Lauren Meister asked who would own the billboard following the 30-year plan, which staff clarified would go back to the seller unless the city then chose to enter a new profit-sharing agreement.

“It just gives us more flexibility,” Wilson said. “If we limit ourselves to only using the billboard money for that site, and if we find other funding sources that covers the operational costs, then that money would just sit there.

Mayor Pro Tempore John Erickson wanted the funding to be earmarked for the work at the Holloway Motel.

“It’s important for me to have that funding source just continually there,” Erickson said. “And I think it’s important that we always know that that pot of money [is there]. Because as we know, billboards sell things, and they bring in revenue and that revenue seems to come no matter what Kardashian [is] featured at the La Cienega and Santa Monica billboard.”

“[We want to ensure] that we have not only shown our priorities with our city dollars but also with what we hear from our residents and businesses that we need to focus on,” Erickson said.

“It’s just space rented in the air so that capitalists can continuously advertise to us, though we have those continuous advertisements in our pocket. I think that generates more money than a billboard in the air that just litters the air,” Vicente said.

Erickson pointed out how the profits from the sign will benefit the community.

“The agreement allows for us to ensure those funds can be used for the critical services that we provide to our most vulnerable are always there, even in downward economic times, which we aren’t in but have seen in the past and how they impact our social services,” he said.