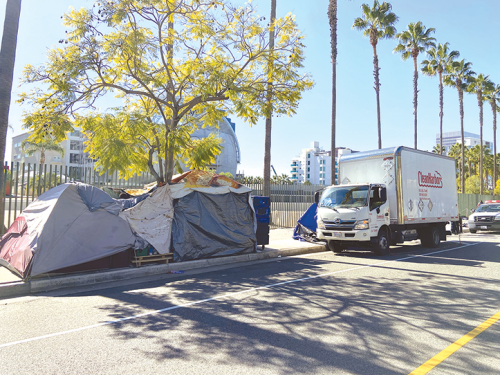 Tents and debris remain along Sixth Street following cleanups by the L.A. Department of Sanitation on Jan. 19 and 24. (photo by Edwin Folven)

The city of Los Angeles Department of Sanitation conducted a cleanup on Jan. 19 at a homeless encampment on Sixth Street just east of Fairfax Avenue, and crews returned on Jan. 24 for further spot cleaning at the site. However, approximately 10 tents and large amounts of trash remain on the sidewalk along Sixth Street behind the Academy Museum.

Los Angeles City Councilwoman Katy Young Yaroslavsky, 5th District, has been hiring staff members for her office’s homeless outreach team, and the plan is for them to provide more services in the coming days.

“This particular encampment is one we are focused on,” Yaroslavsky’s spokesman Leo Daube said. “We are working with the mayor’s office and the housing department on solutions to get these folks indoors and housed. It’s very important for us.”

Mayor Karen Bass and Yaroslavsky have stressed the approach of outreach and services over sweeps and cleanups at encampments. Daube said the effort is ramping up.

The sanitation department removes property that is blocking sidewalks during cleanups, but cannot remove tents and property if they are not blocking the public right of way, and cannot prevent people from returning after crews leave, public works department spokeswoman Elena Stern said. The goal is to remove hazardous materials that endanger public health and the environment. Periodic cleanups will continue to be held at the site but a schedule was not available.

The Mid City West Neighborhood Council is conducting the annual Homeless Count in the local area on the evening of Jan. 26, and the encampment on Sixth Street is one of the locations to be visited, chair Lauren Nichols said. The goal is to identify what services are needed and to ensure people are receiving services, she added.