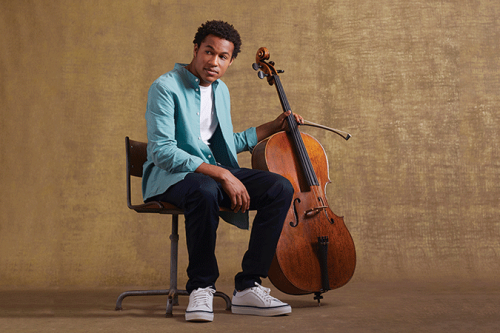 Cellist Sheku Kanneh-Mason will play with the Los Angeles Chamber Orchestra on Jan. 15 and 16. (photo by Jake Turney)

Spotlighting the remarkable diversity of the classical era, LACO also performs Bologne’s “Symphony No. 1 in G Major” and the works of siblings Fanny and Felix Mendelssohn, including “Overture in C Major” by Fanny (Hensel), one of the few surviving works by the beloved older sister of Felix, whose own “Symphony No. 4 in A Major, Italian,” caps the program.

Kanneh-Mason was initially slated to appear on LACO’s Orchestral Series in 2018 but the engagement was postponed after he was invited to perform the same weekend at the Royal wedding of Prince Harry and Meghan Markle, an event that drew nearly two billion television viewers globally and made him a household name. Kanneh-Mason first came to prominence as the winner of the 2016 BBC Young Musician competition, the first Black musician to win the award since its launch in 1978. He has since performed in illustrious venues around the globe. He previously appeared under LACO’s umbrella in 2019 in a concert co-produced with The Colburn School.

LACO recognizes the generous support of the Colburn Foundation and the Andrew W. Mellon Foundation. The Orchestra also receives public funding via grants from the city of Los Angeles Department of Cultural Affairs, the Los Angeles County Arts Commission and the National Endowment for the Arts. LACO gratefully acknowledges Hogan Lovells US LLP for generous pro bono support. Steinway is the official piano of Los Angeles Chamber Orchestra.