Byers looks ahead to WeHo’s future 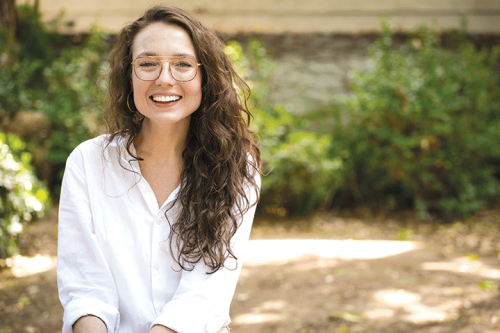 After the first ballots were count­ed in November, it looked like Chelsea Byers’ campaign for West Hollywood City Council might just be over. Byers, however, said she had confidence that the long count­ing process would end in her favor.

“Mail-in ballots have shifted the way the vote tallying process hap­pens, so my team and I knew it was important to wait until every vote had been counted, and the county indicated this process would take some time,” Byers said. “Because we had developed a more progres­sive, younger and renter-heavy base of voters, we knew this group would likely vote closer to election day, meaning our votes would be among the last to be counted.”

With each ballot update, Byers gained, and by the time the final results were certified, she had gar­nered the second-highest vote count, comfortably securing one of the three open council seats.

Byers believed that the voters were looking for a clear, positive and visionary message, something she felt aligned with her unique lived experience and values. Also,

one of the cornerstone issues of her campaign had far-reaching impact “Cities have a tremendous opportunity to meaningfully address climate change through land use policy at the local level,” Byers said, evoking her activist spirit, something that has been intrinsic to West Hollywood since the city’s inception in 1984. For Byers, this issue extends to finding new and improved ways to expand mobility across the city.

Byers highlighted recent advancements by the city, includ­ing the bike giveaway program, the Fountain Avenue pilot program and CicLAvia events as ways the city has created “excitement around vehicular alternatives.” Additionally, she would like to develop what she calls a bike library for access to e-bikes and cargo bikes for use as short-term rentals.

Prior to the meeting, she said city staff helped her prepare, teach­ing her in a limited time frame how to navigate the 501-page agenda.

Among the issues discussed were Pride and public safety, and Byers made sure there was no room for error on her first day.

“I had never seen the other side of the dais before – not for a com­mission meeting or otherwise. I arrived three hours before the meeting began to give myself time to get comfortable and get ready,” she said.

Byers added that she sees oppor­tunities for collaboration with the new council, which also includes outgoing Mayor Lauren Meister, Councilman John Heilman, incoming Mayor Sepi Shyne and incoming Mayor Pro Tempore John Erickson. She is the only member of the new council to have never served in a previous term.

“I am grateful for the ways my colleagues have shared their best practices for navigating big agen­das, handling constituent relations, working with staff and so much more. It’s an incredible honor to serve with this dedicated group of individuals,” Byers said.

Collaboration is a big part of her philosophy, citing that it was the community, her campaign team and voters who helped to guide her to the council seat. She said she believes through continued collab­oration great things can be accom­plished for the city of West Hollywood.

“I am looking forward to getting people newly engaged in West Hollywood – whether it’s people who are stepping into leadership for the first time or longtime lead­ers engaging in new subjects. I am also very much looking forward to working with neighboring munici­palities on our shared challenges,” Byers said.