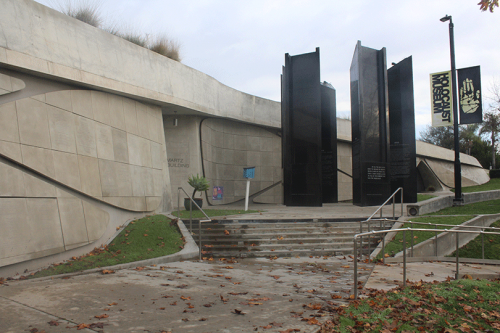 As part of its ongoing conversation series on race relations and social justice, Holocaust Museum L.A. invited leaders from the Black and Jewish communities to discuss how both groups can work together to improve human rights. (photo by Joey Waldinger)

Donzaleigh Abernathy, the daughter of influential civil rights leader Rev. Ralph Abernathy, became involved in the struggle for social justice before she was even born.

When Abernathy’s mother was pregnant, the Ku Klux Klan bombed her home in Montgomery, Alabama, on Jan. 10, 1957. After she was born, Abernathy inherited the terror her mother felt during the attack, she said.

“I was born months later … and I trembled for six months [after being born]. So I was carrying the trauma in my body that my mother had experienced,” Abernathy said during a Jan. 10 panel at Holocaust Museum L.A., exactly 66 years after the attack on her parent’s home.

The panel was the latest installment in the museum’s “Building Bridges” conversation series, in which leaders from diverse communities discuss how they can work toward social justice.

During the panel, Abernathy was joined by four other panelists to discuss the relationship and shared histories between Black and Jewish communities. The panel included writer Avi Dresner, president and CEO of the Southern Christian Leadership Council of Southern California Pastor William Smart, president and CEO of the Los Angeles Urban League Michael Lawson and IKAR senior and founding rabbi Sharon Brous. Dan Schnur, a USC professor and former political strategist, moderated the panel.

The panelists discussed how family histories, sometimes painful, impact their communities and their efforts to achieve justice.

Inherited traumas are one of the biggest links between the two communities, said Brous, who empathized with Abernathy’s experience of having physical reactions to violence against her ancestors.

When she was younger, Brous used to say the Sh’ma before showering, the same prayer that Jews recited when they entered the poison showers used to exterminate prisoners at Nazi death camps.

“Somehow, in my body, I understood that Jews used to say the Sh’ma … in case they died,” Brous said.

As painful as it is to acknowledge inherited traumas, doing so is an essential part of taking stock of Jewish and Black people’s history, and recognizing how much progress they have made over the decades, Lawson said.

He spoke about a book called “The Grace of Silence” by NPR reporter Michele Norris, a memoir that investigates the author’s family history. Describing the book, Lawson said that Norris’ father walked with a limp, but he would never explain its origins. Through her reporting, Norris discovered that he was shot by a police officer, a secret he kept from her family.

“The generations that came before us found the trials and tribulations they went through so painful that they didn’t talk about them,” Lawson said. “Almost every African American family in this country has a story like that,” he said.

This includes Lawson’s own, he said. Growing up, his mother always said that she grew up with one sister and nine brothers. When an uncle said that there were actually 10 brothers, his mother grew quiet and continued her chores, Lawson said. Through research of his own, he learned that one of his mother’s brothers had died 18 months after he was born. He did not say if he learned how the child died.

Lawson spends a lot of time working with students of color, and when they talk about issues surrounding race and trauma, they often say that societal conditions have never been so hard, he said.

“I have to remind them as soon as they say that … if you believe things have never been this hard you do not understand your own history,” Lawson said. “What my father went through, what his father went through – what we are going through right now pales in comparison. But it’s not the ‘pale in comparison’ statement that gets me up in the morning. It’s the fact that I know I’m here because of their sacrifices.”

Beyond a history of trauma, Black and Jewish people are also bound by a shared determination for justice, Brous said. The Jews’ exodus from Egypt, which adherents celebrate during the Passover Seder every year, is essential to Jews’ self-understanding. It was also a central narrative of the civil rights movement, she said.

“It is the story that comprises four out of five books of the Torah. It is the very beating heart of our calendar year. It’s the way that Jews have understood ourselves throughout history … that we were enslaved by a tyrant leader who was afraid we would rise up, so he ruthlessly tried to oppress this population,” she said.

She asked the audience to think about how some elected leaders make decisions that inhibit justice and progress, and to imagine if they elected leaders who instead worked to foster “a true multi-racial democracy.”

“Liberation cannot be had by one people unless liberation is had by all people,” Brous said.

Created in the wake of the murder of George Floyd, the ongoing conversation series was conceived as a way for different groups to come together and achieve this common goal, Holocaust Museum L.A. CEO Beth Kean said.

“I am pleased to welcome community leaders for productive discussions on how our communities can continue to foster stronger ties, and work together to fight hate and injustice and build a more humane world,” Kean said.