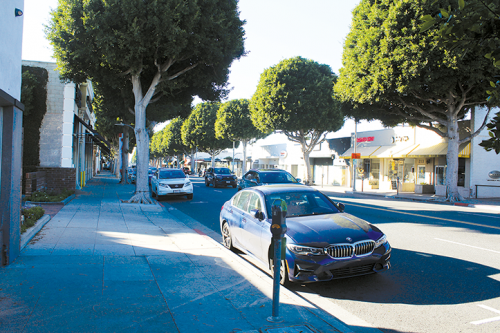 Beverly Hills Police Department officers arrested a suspect in a robbery that occurred in the 200 block of South Robertson Boulevard on Jan. 21. (photo by Joey Waldinger )

Beverly Hills Police Department officers arrested two suspects connected to robberies that occurred on the evening of Jan. 21, according to BHPD bulletins. Officers also arrested a male suspect for driving a stolen vehicle on Jan. 23.

At approximately 7 p.m. on Jan. 21, an armed suspect entered a business in the 200 block of South Robertson Boulevard and demanded property from an employee, BHPD Capt. Giovanni Trejo said. The suspect stole the property and fled on foot, he added. Trejo declined to identify the store.

A BHPD alert said the suspect may have entered a black sedan on Robertson Boulevard. Officers did not have any additional information on the getaway vehicle, but “virtual patrol officers” in the Real Time Watch Center conducted follow up investigations, Trejo said.  A suspect in the robbery was identified and arrested early on Jan. 25 in the area near Peck Drive and Gregory Way.

A separate robbery occurred on Jan. 21 at approximately 7:20 p.m. in the 300 block of North Beverly Drive, Trejo said.  While fleeing a business at that location, the suspect battered an employee, which elevated the charge from a theft to a robbery, he added.

After officers arrived, the suspect was initially uncooperative, and they had to use de-escalation techniques to place him under arrest without using force, Trejo said.

After officers attempted to stop the gray Dodge Charger at approximately 5 p.m., the driver exited and fled on foot, Trejo said.

Officers chased the suspect for one block before taking him into custody. No injuries were reported, Trejo added.

The suspect was charged with driving a stolen vehicle and resisting/delaying arrest, Trejo said.