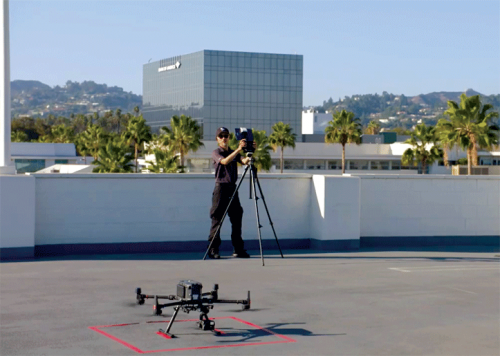 The Hawkeye drone, launched from a rooftop, helps BHPD officers
assess a situation before they arrive on the ground. (photo courtesy of the Beverly Hills Police Department)

During a virtual town hall in December 2021, Beverly Hills Police Chief Mark Stainbrook, who had recently been sworn in, said that the city was beginning to incor­porate drones into its growing sur­veillance system.

A day before the town hall, the city flew its first drone mission, and Stainbrook said he was working towards 24-hour coverage.

“The drone really can do many of the things a helicopter can do and at a much lower cost,” Stainbrook said.

A little more than a year later, the police department flies a drone called Hawkeye every day of the week, giving officers in the Real Time Watch Center a view of scenes before officers arrive on the ground. “I’ve been on the job for 28 years. When I started we had [mobile data computers], we had radios. What we didn’t have is what I call now the 3D incident command space, which allows us to use drones … and other technology to enhance the officers’ operational abilities,” Lt. Robert Maycott said in a social media video featuring the Hawkeye drone.

When the department receives a radio call, they are able to launch Hawkeye to see the conditions on the ground from where the radio call was received, and prepare officers for what to expect, he said.

The video included some of the footage that Hawkeye has captured, showing the different ways in which the technology is used. In one scenario, the drone zooms in on a man standing on a patio of a popular coffee shop, and officers can be heard saying that after an employee approached the man for leaving without paying his bill, the man threatened the employee with a taser. After a dispatcher described the man, two officers walked into the patio and arrested him.

The video also showed how all of the BHPD’s tools work together. Over video of a car driving down a street, a dispatcher said that an auto­matic license plate reader has tracked the car traveling eastbound on North Santa Monica Boulevard.

“It’s going to be an embezzled vehicle,” the dispatcher said.

It then cut to show two police cars trailing the vehicle.

“Looks like we’ve got sufficient units, I’m going to initiate a traffic stop,” an officer said.

In an interview last month, Stainbrook said that the department owns approximately 15 smaller drones that officers carry in their vehicles to deploy if necessary.

For Stainbrook, the BHPD’s embrace of technology was one his main draws to the city, and it is an effort he aims to expand as police chief.

“I thought being able to put those [resources] into use to help the offi­cers and the detectives in the field could really be leveraged in a way that it had never been before,” Stainbrook said. “And I think right now we’re seeing some of the fruition of that.”

A little more than a year after being sworn in, overall crime rates are down in the city, he said, with the biggest decrease recorded among property crimes. Stainbrook attrib­uted much of this decrease to the city’s technological tools.

Along with its fleet of drones, the city relies heavily on its automated license plate readers and cameras. But there is still room for improve­ment, Stainbrook said.

“Although we have a lot of good technology and we’ve started intro­ducing new technology like drones and more automated license plate readers, the real question is, how do we use this technology together in the most effective and integrated manner? I think we can do this, and it’s really the wave of the future for policing,” Stainbrook told the City Council in April.

Last month, Stainbrook said that he wants to concentrate cameras in strategic parts of the city, and equip more cameras with technology that can read license plates. He has also explored the implementation of soft­ware that could alert officers if a car enters the city with an obscured or missing license plate, often a signal of criminal intent, he said.

And he wants to get permission from the Federal Aviation Administration to fly drones across the entirety of the city. Right now, drones patrol approximately 80% of Beverly Hills, he said.

According to an April staff report, the city has budgeted $2.45 million for the Real Time Watch Center for this fiscal year, and in subsequent years, the center will have a price tag of more than $1.8 million annually.

“The integrated use of technology, the way we’re using our technology, is really going to revolutionize the way we secure the city,” Stainbrook said.

State schools superintendent to be sworn in Jan. 7