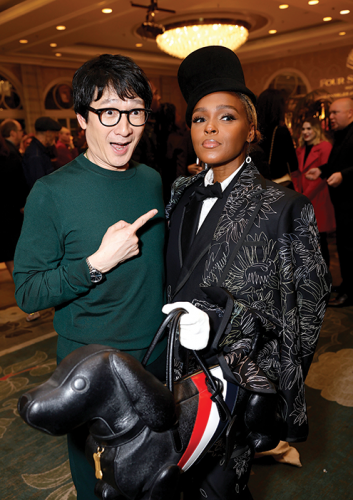 The British Academy of Film and Television Arts (BAFTA) hosted the BAFTA Tea Party for the first time in two years on Saturday, Jan. 14 at the Four Seasons Hotel Los Angeles. The event was presented by first-time partners Delta Air Lines and Virgin Atlantic.

“BAFTA is a significant arts charity and we provide a yearlong schedule of development, networking and outreach programs mostly for those who are new to the industry from underrepresented groups and this year, I am really pleased to announce that we will tackle the imbalances in the socio-demographics in our industry and specifically, we will tackle the barriers for progression for those from low-income families,” BAFTA CEO Jane Millichip said.

A staple fixture in the awards season calendar, the BAFTA Tea Party in Los Angeles welcomes contenders, members and guests for a uniquely elegant gathering, in the run-up to the EE BAFTA Film Awards in London on Feb. 19. The party has a long tradition of recognizing the very best talent and is a must-attend event, popular with talent seeking a respite from the hectic and demanding season. The event supports BAFTA’s year-round Learning, Inclusion and Talent programs in North America, creating opportunity and career pathways for talented individuals from all backgrounds.