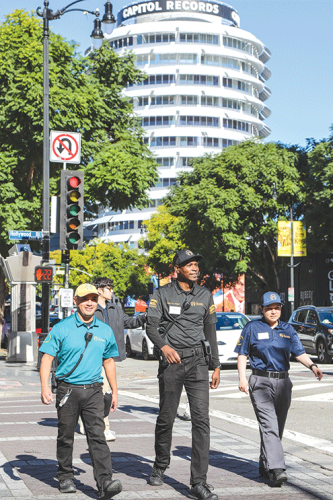 A team of 90 ambassadors are patrolling Hollywood Boulevard and the surrounding streets through a collaboration launched on Jan. 25 by the Hollywood Partnership, which oversees the business improvement district in the area.

The ambassadors are employed by Block by Block, which also contracts with the city of West Hollywood to deploy security ambassadors in that city. Under the Hollywood Partnership’s contract with Block by Block, the company is providing safety ambassadors as well as cleaning and hospitality ambassadors. The ambassadors will proactively address any problems that arise, and will work with city departments and nonprofit service providers. They will also respond to calls for service from a 24-hour dispatch center at 6562 Hollywood Blvd. that was unveiled by the Hollywood Partnership on Jan 25. The dispatch center is open to the public as a community resource.

Kathleen Rawson, president and CEO of the Hollywood Partnership, said the program had a soft-launch at the beginning of January and she has already received positive feedback. She said many business improvement districts, and local governments, contract with companies like Block by Block to provide unarmed ambassadors in busy entertainment districts and areas with a large amount of foot traffic.

The dispatch center will be staffed 24 hours to field calls for service at (323)465-0122. If someone is leaving a location late at night and needs to be escorted to their car, they can call the dispatch center and an ambassador will be sent, Rawson said.

Cleaning ambassadors will be deployed for incidents like graffiti and trash removal. The hospitality ambassadors will walk the streets to provide directions and information about Hollywood landmarks.

“It’s really a game changer for Hollywood. We are using a very human approach to focusing efforts, and can use the dispatch center as a community hub for all the services available in Hollywood,” Rawson said. “All of our folks do everything. They are cross-trained to respond to any situation.”

The ambassadors will be deployed in an area roughly located between the Hollywood (101) Freeway and La Brea Avenue, and Franklin Avenue and Santa Monica Boulevard. The program is expected to cost approximately $5 million per year. It will be funded by the Hollywood Partnership, which assesses fees from business and property owners in the Hollywood Entertainment District to raise money for neighborhood improvements. The partnership has an $8 million annual budget, Lawson said.

The new ambassador program was also supported by the Los Angeles County Board of Supervisors, which provided $250,000 for the new dispatch center through a motion by former Supervisor Sheila Kuehl, 3rd District. Kuehl’s successor, Supervisor Lindsey Horvath, previously supported the Block by Block program as a West Hollywood City Council member and vowed to continue support for the program in Hollywood.

“I’m delighted to celebrate the opening of the Hollywood Partnership Community Dispatch Center, a fantastic new resource in Hollywood and a monumental step forward for this iconic neighborhood,” Horvath said. “Thanks to my predecessor, Supervisor Sheila Kuehl, Hollywood will soon be home to dedicated, boots-on-the-ground services 24/7 that will meet individuals in need where they are, sending in specialized advocates who can connect some of our most vulnerable community members with the care and services that they need. I know that this center will have a real, tangible impact on our Hollywood community and our region’s homelessness crisis.”

Capt. Ben Fernandes, with the LAPD’s Hollywood Division, said the program will be beneficial in addressing quality of life issues, freeing officers to respond to more serious criminal problems.

“It’s a good collaborative effort with the business community,” Fernandes added. “They will be the eyes and ears out there. When there is a violent situation, they will call police and we will respond. They will also be doing outreach and helping the homeless and serving people suffering from mental illness utilizing Urban Alchemy. It’s a total collaboration.”

A grand opening for the new dispatch center was held on Jan. 25 and included representatives from the LAPD and local service providers, as well as Horvath and Los Angeles City Councilman Hugo Soto-Martinez, 13th District.

“Unarmed professional safety ambassadors will be able to connect people to services, especially mental health and addiction services, to make Hollywood safer, cleaner and more welcoming for everyone,” Soto-Martinez said. “We’re looking forward to continuing to work with the Hollywood Partnership, residents and businesses to address the critical issues facing our community.” cleaning ambassadors wear dark blue and hospitality ambassadors wear light blue shirts. Rawson encouraged members of the public to approach the ambassadors whenever they need assistance.