2022’s best, weirdest, most off-the-wall moments on any screen

Some great isolated scenes, ideas, themes and concepts shined bright across film and TV offerings last year. These 20 are worth a look, but you should probably watch them first before you read on.

On the Netflix anthology series “Guillermo del Toro’s Cabinet of Curiosities,” each entry plays like an hour-long movie. Third episode, “The Autopsy,” starring F. Murray Abraham, is a gruesome, suspenseful body of horror that could oddly work just as well on stage.

When the original “Sonic the Hedgehog” trailer premiered, viral backlash resulted in a complete character redesign. But what happened to Ugly Sonic? He works the convention circuit alongside other forgotten animated icons in “Chip ‘n Dale: Rescue Rangers,” a wildly clever, shocking comedic win for Disney+.

Nicholas Cage’s career path is just as batty as “The Unbearable Weight of Massive,” featuring the “Con Air” star as himself. And what’s more Nick Cage than the late 50s man debating his own stardom with an airbrushed younger version of himself, topped off with a meta lip lock?

“X” is a stylish take on the ‘70s slasher, but nobody expected a horror prequel to arrive six months later. And in lieu of exploitation vibes, “Pearl” feels more like a twisted take on “The Wizard of Oz.” In both films, Mia Goth proves she’s more than a final girl as both victim and villain.

In April, Jim Carrey floated the idea that “Sonic the Hedgehog 2” would be his last film. Certainly, that might seem like a modest conclusion to a wacky career. Then again, there’s his last line ever, as the villainous Dr. Robotnic in a mech robot about to topple over and explode: “Later haters.” That fits.

“Abbott Elementary” is a charming looking into the lives of struggling teachers. But what brings the whole story together is Janelle James as Principal Ava. Her vanity and initial indifference play so well against other more competent school employees. Then comes her evolution. So enjoyable.

You know when a battle ensues and you hop on your buddy’s shoulders to defy physics and the odds – meet “RRR,” the biggest Bollywood film in history with a story equally bonkers and epic.

How did a “Top Gun” sequel earn so much? It’s a long story impacted by a pandemic and moviegoers yearning for something grandiose on the big screen. Nobody saw this coming, but it’s all worth it for those aerial scenes. They’re why IMAX exists.

A “Werewolf” tops the MCU

Amidst recent fumbles, Marvel TV special “Werewolf by Night,” the first and best of this new small-screen kind, should pave the way forward. This monster-movie throwback is wonderfully directed and scored by Michael Giacchino, proving magic can happen in 52 minutes, compared to features drunk on their own juvenile jokes and insulting Easter eggs.

The “Predator” series finally earns a worthy successor to the original, featuring a near-entirely Native American and Indigenous cast in a story both culturally respectful and intense. “The Cloverfield Lane” director Dan Trachtenberg and lead star Amber Midthunder are a perfect match here.

Guillermo del Toro veers far away from Disney’s takes on “Pinocchio,” including an entire subplot about death. As a magical being, the wooden boy is immortal, returning to life after each death. But between life and death, he spends moments with Death, never quite getting the answers he needs surrounding life’s many mysteries. The whole film wreaks of death, in lasting, haunting, saddening ways.

Jenna Ortega as Wednesday Addams in a Tim Burton-led Netflix spinoff series is a fun romp, and the goth girl’s dance moves are something truly supernatural. So memorable, loads of folks continue to present their own interpretations of the dance, including at least one figure skater’s performance.

The caped crusader arrived in 1939 under the publishing title “Detective Comics.” As that shortened to DC, Batman’s adaptations would also soften those detective origins. “The Batman” finally lets the superhero with no actual powers do what he does best, investigate.

Throughout eight episodes, FX-Hulu series “The Bear” traumatized viewers with a high-anxiety look into a struggling restaurant’s kitchen. Then comes the season finale. Carmy opens a letter from his deceased brother, revealing a tip to making some mediocre spaghetti. That leads to a wonderful payoff that makes every scream, cigarette and fever dream transform from horror to a mere family squabble. Here’s to more emotional derangement in season two.

The “Knives Out” sequel presents a more complex mystery than its sequel, but oh boy does “Glass Onion” go out big. When all stones are finally unturned, the Mona Lisa’s role in concluding the story is so perfect, so unexpected, so satisfying. 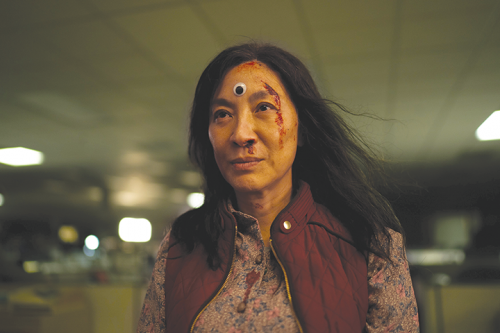 Michelle Yeoh is wonderfully engaging in “Everything Everywhere All at Once,” one of the best of 2022. (photo courtesy of A24)

All of “Everything Everywhere”

Michelle Yeoh saves the day in the best film about the multiverse, “Everything Everywhere All at Once.” Whether she’s a laundromat owner, martial arts master or a rock, she slays. So too does Ke Huy Quan (Data from “The Goonies”) back on screen, killing it.

Kate Bush’s “Running Up That Hill” accents Max’s thrilling escape from the Upside Down in “Stranger Things 4.” The sequence is nail biting, perfectly executed. Soon after, Bush became the oldest chart-topping artist, as her ‘80s anthem climbed the Billboard charts even higher than the first time around. Great summer win.

“Star Wars” doesn’t monologue, but screenwriter Tony Gilroy (“Michael Clayton,” the “Bourne” films) does. And when Luthen (Stellan Skarsgard) tells an informant about his personal sacrifice, he unloads some of the “Star Wars” universe’s most haunting lines.

“I’m condemned to use the tools of my enemy to defeat them,” he says near the end. “I burn my decency for someone else’s future. I burn my life to make a sunrise that I know I’ll never see. And the ego that started this fight will never have a mirror or an audience or the light of gratitude.”