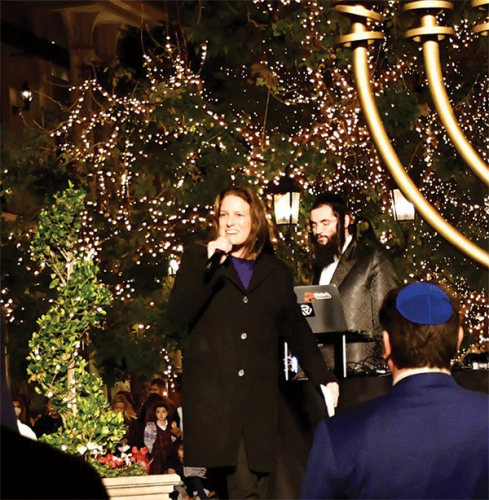 After being sworn in on Dec. 11 during a community ceremony at Plummer Park and sworn in again the same afternoon at City Hall during Mayor Karen Bass’ inauguration, Yarsolavsky participated in her first City Council meeting on Dec. 13. Despite crowds of demonstrators who disrupted the meeting and forced brief unintended recesses, the council approved a motion in support of Bass’ declaration of a homelessness emergency.

Yaroslavsky also introduced a motion at the meeting asking for the Los Angeles Department of City Planning to report on the feasibility of adding a climate action plan to the city’s general plan, and asking for a report from the Los Angeles Police Department and Civil + Human Rights and Equity Department on ways they are addressing hate crimes. Following the meeting, the council went into recess until Jan. 10.

Yaroslavsky said she has also been busy during the first two weeks meeting with other elected officials, representatives of city departments and organizations in the community. On Dec. 15, she participated in the Jewish Federation of Los Angeles’s menorah lighting ceremony in Grand Park, which raised awareness about the Shine A Light anti-hate campaign. The following day, the councilwoman joined the Hancock Park Homeowners Association for a tree planting ceremony. On Dec. 20, she attended a Hanukkah menorah lighting at The Grove.

“It’s been really wonderful,” Yaroslavsky said. “To be able to get together and work together on issues, after essentially three years of campaigning, it’s gratifying.”

Yaroslavsky said she has also been hurriedly hiring administrative staff and announced that Fernando Morales will serve as district director and deputy chief of staff, and Kristen Torres-Pawling will serve as deputy chief of staff. Morales previously served in the office of former County Supervisor Sheila Kuehl and Torres-Pawling previously worked in the county’s Chief Sustainability Office.

The new councilwoman described her first council meeting as “a wild one” due to the demonstrators. She added, however, that there is hope for a fresh start and new collaborations in addressing the city’s most pressing problems, such as homelessness and a lack of affordable housing. Yaroslavsky said addressing homelessness will be a key component in her office.

“We are going to have a dedicated team focused on homelessness, getting beds online and doing a lot of outreach with people,” she said. “I really want to make sure we have a team making sure we are getting people off the streets as quickly as possible. That’s a huge priority.” 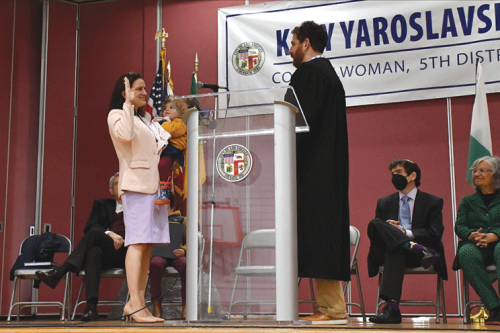 She said the team addressing homelessness will likely be comprised of four members, including two who will conduct direct outreach alongside district field representatives from the office, a coordinator and a policy specialist. Yaroslavsky also said constituent services are critical, and Morales will oversee efforts to ensure community needs are met.

“We are really organizing the office to make sure everything is in place,” Yaroslavsky said, adding that she plans to announce more staff members in the coming days. “We want to learn what’s happening in the field and open the lines of communication. The field side can’t be separate from what’s happening downtown.”

Yaroslavsky encouraged people with concerns to call her office at (213)473-7005.

“They can reach out to our main number and we will get them to the right person,” she said. “There are just a few more positions we are trying to fill and we will be ready to go.”