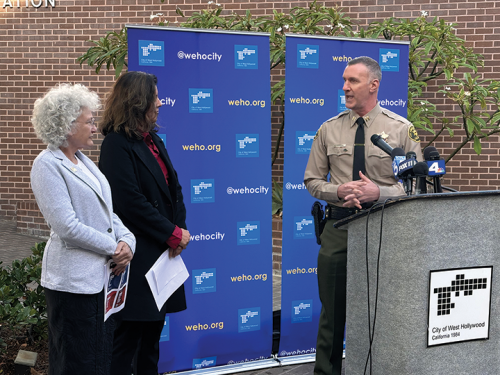 Among the provisions suggested by Meister were several specific to vehicles, such as locking car doors, hiding valuables, keeping recent purchases out of sight, parking in safe well-lit places, not overburdening with packages when leaving a vehicle, and being cognizant of surroundings. For home deliveries, she suggested getting a camera to watch for packages, or getting a locker or post office box to keep deliveries safe.

Meister also recommended citizens light their homes and add motion sensor lights to keep burglars at bay. She also advised residents to hang on to their purses and backpacks, and keep their wallets and cell phones in their front pockets. When going out for the evening, Meister said people should watch their drinks and be mindful of leaving with people they don’t know. She also said people shouldn’t “over imbibe” so they don’t leave themselves venerable.

For out-of-town visitors, Meister recommended securing their luggage and not leaving it unattended, as well avoiding carrying large amounts of cash and paying with check or credit card whenever possible. Finally, she advised people not to walk around with “your head in your phone.”

“Look up and know what’s going on around you,” Meister said. “You know, I’m from New York originally, and that’s the first thing they tell you. Be aware of your surroundings.”

Following the Nov. 19 mass shooting at Club Q in Colorado Springs, Colorado, some residents have expressed concern over the safety in West Hollywood’s Rainbow District, where popular LGBTQ+ clubs like The Abbey Food and Bar, Micky’s and Rocco’s are located.

“We had a tragic LGBTQ mass shooting just recently, and we have been working with our sheriffs as well as our Block by Block security ambassadors to absolutely ensure that our nightlife safety establishments in the LGBTQ rainbow district, and our community is safe,” Mayor Pro Tempore Sepi Shyne said. “LASD has ramped up patrols and we’ll be continuing to make sure that visitors [and] residents [in] our city are safe. The message to anyone that may be wanting to come and cause harm is: don’t even try it.”

Both West Hollywood Sheriff’s Station Capt. Bill Moulder and Block by Block’s southwest regional vice president David Aguilar spoke about their commitment to public safety. Block by Block’s presence was expanded in recent months, with dozens of additional ambassadors and new kiosks, while the potential elimination directed by City Council of four sheriff’s deputies has been pending. Originally, two deputies were to have been eliminated this fall, but the action was delayed while Block by Block completed the hiring and training of their new ambassadors. The reduction of two deputies is expected to be addressed within the next month by the City Council.

“West Hollywood is a safe place to be,” Moulder said. “Certainly, we have a wonderful partnership with our Block by Block folks, our code compliance folks and our parking enforcement [folks] as a complete community safety team, doing everything we can to ensure the safety of our city.”

At the Dec. 5 City Council meeting, resident Anthiny Devgenic raised concerns about the effectiveness of Block by Block, describing an incident in which he saved a transgender woman from an attack.

“[Block by Block ambassadors] seem to be adolescents protecting adults, but it should be the opposite,” Devgenic said. “What we need to start with guards. If we’re not going to up the West Hollywood Sheriff’s Department, that’s fine, but we need to be safe and we are not. I see it every night of my life. I don’t want to get involved because I don’t want myself or my business in jeopardy, but we are in desperate need of armed guards.”

“Block by Block has had a number of new hires in the last 60 days, so this may be an issue of a learning curve,” Meister said. “Obviously, we should emphasize to all community members, as well as Block by Block, that if a situation appears dangerous [and is] escalating, the appropriate action is to call 911.”

“We’re working to connect the pieces between Block by Block and our sheriff’s department to ensure that people can be and feel safe in our city and all proper procedures are followed when reporting these issues to law enforcement,” Councilman John Erickson said. “No one should feel like they don’t belong in our city and any violence towards anyone is unacceptable.”