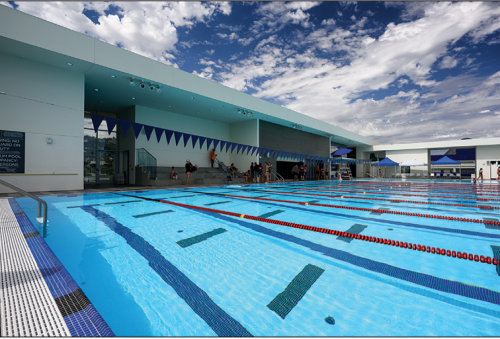 After much anticipatoin, the West Hollywood Aquatic Center opened this summer and was immediately a popular activity site for residents. (photo courtesy of City of West Hollywood)

The city of West Hollywood’s Aquatic and Recreation Center at West Hollywood Park has recently received multiple honors, including recognition from the American Public Works Association and the American Institute of Architects, and the project has been certified LEED Gold (Leadership in Energy and Environmental Design).

The city’s ARC received the American Public Works Association Southern California Chapter 2022 Project of the Year Award in the Buildings category. APWA serves professionals in all aspects of public works making it an effective voice of public works throughout North America. With a worldwide membership of more than 30,000 strong, APWA includes personnel from local, county, state and federal agencies, and private sector personnel who supply products and services to those professionals.

The city’s ARC project also received two awards from the American Institute of Architects Orange County Chapter: The Honors Award for commercial design; and a C.O.T.E. Award, for resiliency and sustainability in design. Founded in 1857, members of the American Institute of Architects consistently work to create more valuable, healthy, secure and sustainable buildings, neighborhoods and communities. The AIA advocates for public policies that promote economic vitality and public well-being.

The city of West Hollywood was recently notified that the new West Hollywood Park Aquatic and Recreation Center has also been awarded a Gold LEED Certification, surpassing its planned energy and environmental sustainability goals. The LEED rating system was designed by the U.S. Green Building Council, which encourages and facilitates the development of sustainable buildings. A Gold LEED Certification is one of the highest attainable ratings and only a handful of municipal buildings in California have achieved this standard.

The ARC is a vibrant new 75,000-square-foot space overlooking the heart of West Hollywood Park, adjacent to West Hollywood Library. With its exuberant design, the ARC has been envisioned as a gathering space for a range of community gatherings, special events, sports activities and recreation programs. On four levels with a grand stairway entrance from the park or by elevator access from parking levels off of El Tovar Place, the ARC features two gleaming rooftop swimming pools with captivating views. A large-scale multi-sport court accommodates a variety of indoor sports such as basketball, volleyball and dodgeball. The ARC also features five community meeting rooms and one conference room in addition to offices for staff from the city’s Recreation Services Division, a Tiny Tot program classroom and a public access TV studio.