‘Violent Night’ gets points for effort, not much else 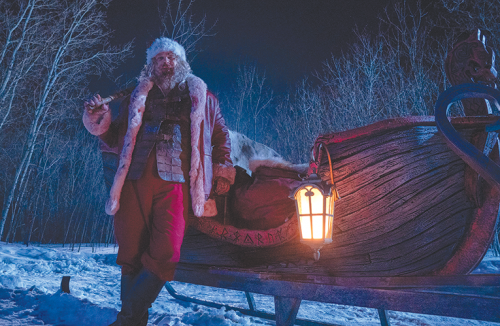 David Harbour is not a typical Santa in the new film “Violent Night.” (photo courtesy of Universal Pictures)

So John McClane, Kevin McCallister and Willie Soke walk into a movie theater together. Out pops “Violent Night,” an absurd holiday flick whose bonkers premise doesn’t have the courage to completely let loose. David Harbour as a disgruntled, combat-ready Santa works well enough. Everything else goes down like a lump of coal.

Imagine a disgruntled Santa (Harbour) bemoaning selfish kids at a bar. He’s onto something: the joy only lasts a few moments before those little toy addicts want the next plastic fix. Then he takes off on his magical sleigh quite drunk. No to worry, as we later learn, the reindeer do all the work. That’s a solid intro scene.

Then comes the Lightstones, a well-to-do family toxic in ways only money can buy. They give credence to any claim we should eat the rich. We spend too much time with these vile folks, mostly desperate for crumbs from matriarch Gertrude’s (“Christmas Vacation’s” Beverly D’Angelo) lavish dining table.

The heart of the film revolves around favorite son Jason (Alex Hassell) and estranged wife and daughter Trudy (Leah Brady). They’re kinda likable, but sister Alva (Edi Patterson) and spawn are the worst. There’s even a dig at Hollywood (you know, that hand that feeds these films) in the form of Alva’s new bae, Morgan Steel (Cam Gigandet), a wannabe action star with a holly, jolly punchable face.

Then a thief, who simply goes by Mr. Scrooge (John Leguizamo), interrupts the festive brown-nosing with a crew targeting the downstairs safe. All sporting Christmas-themed names, these elite criminals planned for everything probable that could go wrong. Not drunk Santa.

St. Nick magics his way into the house for a regular delivery to Trudy, always atop Santa’s list, just in time for gunshots that scare off Blitzen and the other reindeer. Kris Kringle has only one way out, through armed burglars with weapons like tree toppers and all the mysteries in his endless gift sack.

A ludicrous premise occasionally pays off. A former hitman’s dog dies, resulting in a vengeful rampage – three successful films and a fourth on the way. A tree and a raccoon on a spaceship – the trilogy concludes next year.

But for every great sensational idea, there’s “Abraham Lincoln: Vampire Hunter” or “Hansel & Gretel: Witch Hunters,” both B movies banking on interest in an over-the-top premise more than a polished action flick. That flick is actually directed by Tommy Wirkola, responsible for “Violent Night” too.

Wirkola earned nerd cred for the 2009 Norwegian zombie comedy “Dead Snow,” but the journey since then, including a “Dead Snow” sequel, hasn’t gone up. This holiday movie enjoys better performances and production value, but it neuters the premise.

This is pretty dumb stuff – no way around it – but it could go big, truly off the wall. Instead, those pesky Lightstones and Mr. Scrooge scenes overwhelm the story. Santa gets the short shrift, and the story suffers because of that. And those allegedly thrilling moments traverse well-trodden roads.

It’s all too easy. Christmas songs accent action scenes and violent deaths. Santa battles foes sucking on a candy cane, using it once sharpened to a point. That’s kinda fun. There’s even a wink to “Home Alone” when some booby traps do more than momentarily injure assailants.

It all seems hilarious, but it could be more – better action, more involved plot, richer Santa backstory, as outlandish as that sounds. Sure, defenders will defend it as just a silly film that ain’t gonna win any awards. That’s a tired trope.

Silly films can be still be effective and entertaining, and one such film is itching to break out. Harbour is a wonderful talent, a master at jaded and unhappy on the big and small screen. “Violent Night” permits that to a degree. It even presents an oddly compelling origin of Father Christmas, only to do very little with that information.

Santa as an action hero sounds hysterical. Perhaps someone in the future will use the enjoyable premise and take it a bit more seriously, at least regarding the film’s finer points like pacing and appropriate use of screen time. Until then, maybe wait ‘til “Violent Night” releases on video, instead enjoying some visions of sugar-plums dancing in your head.