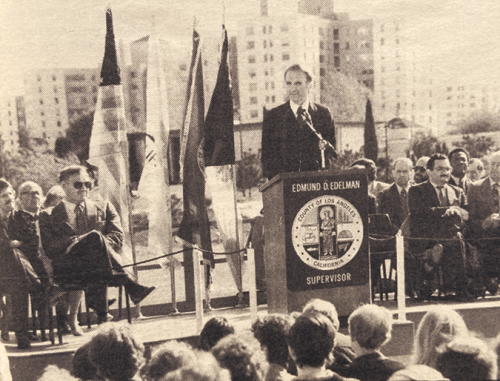 A dedication ceremony was held for Pan Pacific Park in this photograph from the Dec. 8, 1983, issue of the Park Labrea News. Then-Los Angeles County Supervisor Ed Edelman discussed the 10-year effort to build the park and the impact it was expected to have on the community. Los Angeles City Council President John Ferraro and City Councilman Zev Yaroslavsky attended the ceremony, along with state Sen. David Roberti. Edelman, Roberti, Ferraro and Yaroslavsky helped raise approximately $10.4 million to purchase the 28-acre site in 1975. The park, bordered by Beverly Boulevard, Third Street and The Grove Drive, is operated by the Los Angeles Department of Recreation and Parks and remains a popular gathering space.

“Pan Pacific Park is the result of a major cooperative effort on the part of the county, city and state, as well as a hardworking citizen advisory committee, to provide this much-needed greenspace in the densely-populated Beverly-Fairfax area,” Edelman said.