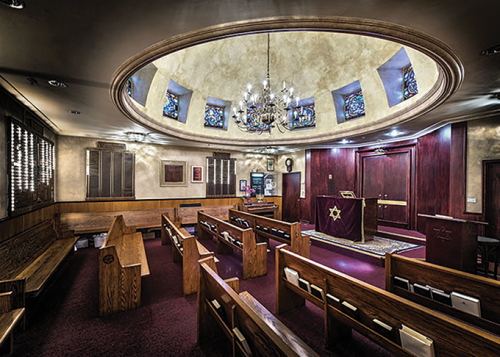 In spite of an alarm sounding over an upcoming demolition of Hollywood Temple Beth El, located at the corner of Crescent Heights Boulevard and Fountain Avenue, officials from the synagogue say that congregants should not be concerned.

“The news of the demise of the temple is greatly exaggerated as Mark Twain said about news of his dying,” Iranian American Jewish Federation president M. Elie Alyeshmerni said. “We just repaired the whole roof fully. We are about to renovate the Sapper Hall and have been doing everything we can to increase income and decrease expenses and keep the building in good shape.”

In February 2020, the Iranian American Jewish Federation, which has owned the building since 1997, submitted a request to develop the property. On Nov. 17, West Hollywood’s planning commission approved a permit that would allow the site to be redeveloped with a new 90-unit, five-story residential building. Following the decision, West Hollywood resident Lynn Russell filed an appeal to the City Council. Russell noted that Temple Beth El, also known as Temple of the Stars, was erected by some of Hollywood’s earliest luminaries, including Edward G. Robinson and Louis B. Mayer. She also noted that many of the current congregants are Holocaust survivors, and she said they spoke movingly in favor of the building’s preservation at the November meeting.

Alyeshmerni pointed out that the fate of the property is far from sealed.

“There is a big difference between entitlements and permits and they are many years apart and a lot can happen in between,” Alyeshmerni said.

Regardless, a 2016 Commercial Historic Resources Survey did not find the structure, built between 1952 and 1968, to be eligible as a historic landmark. West Hollywood Preservation Alliance board president Victor Omelczenko said that the city should reconsider this decision.

“Temple Beth El warrants having a specific historic resource assessment conducted before any decisions are made about its demolition,” Omelczenko said.

“There has to be new evidence or new materials that would require us to reevaluate the designation that was given to us by the consultant we hired,” Gallo said.

Looking past whenever the building might be demolished, if it is demolished at all, Rabbi Norbert Weinberg said Temple Beth El’s mission would continue.

“At this point, Hollywood Temple Beth El, as a synagogue, is still functioning. We are in the midst of exploring our future options with the Iranian American Jewish Federation, but all is in place for the next several years,” Weinberg said.

Thank you, Chris Erskine, for the smiles in our lives

Hope the destruction of the Temple will never happen