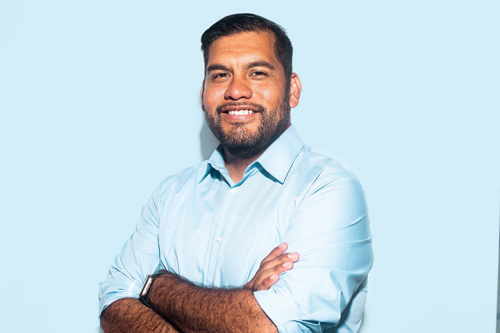 The new councilman, who defeated O’Farrell in the Nov. 8 election, will begin his first stint in public office, and said he plans to bring fresh perspectives to problems like homelessness that have become entrenched in Hollywood, and throughout the city.

Soto-Martinez, an East Hollywood resident, said although he has not previously held public office, he has a long history of organizing and advocacy with Unite Here Local 11, a union representing more than 32,000 hospitality workers in Southern California and Arizona. He said his experience in building relationships will be key, and he plans to start the process on Day One. Soto-Martinez also said people can expect change under his leadership.

“I decided to run because I felt that the city was not acting with the sense of urgency that was required for many of the issues that we were facing, that were facing our city – housing, homelessness, transit and climate. I just felt I had to do something,” Soto-Martinez said. “I think what people can expect from me is that I’m a collaborator, a listener, I like building coalitions, I like listening to [everyone]. No matter where you fall on the spectrum, I think that when you spend time to listen and you really put yourself in people’s shoes, what you find is that we kind of agree on a lot of things we have in common. We might have a disagreement, but when you approach it with a lot of trust and commitment to seeing the humanity and seeing the issues as interconnected, we can work through some of those tensions. I really relish the process of dialogue, communicating to find a solution.”

Soto-Martinez said he is establishing his office and has hired Patricia Castellanos as chief of staff and Josh Androsky as director of communications. Castellanos formerly served as workforce and economic development deputy for former Los Angeles County Supervisor Sheila Kuehl. Androsky previously served in communications in Councilwoman Nithya Raman’s office and on Soto-Martinez’s campaign.

Soto-Martinez also said he has offered staff members from O’Farrell’s office the opportunity to join him, and the hiring process is open.

“We have put it out and asked them to apply for their position. We want to give them a shot. We feel that they’re qualified and we’ll keep them on,” Soto-Martinez said. “I think it will be a work in progress. We hope to have at least the most important positions ready [on Dec. 12]. That’s the constituent services piece, case managers, so that the constituents won’t feel the difference … or maybe they will – an improvement.”

Soto-Martinez said he has not specifically established what his first motions will involve, but said they will follow his key campaign promises of addressing homelessness and housing. He also said he is planning to form special committees or groups within his office with experts from all walks of life, including community members, to address issues.

“We want to work with every neighborhood council, homeowners association, business interests, grassroots organizers, homeless advocates. It doesn’t matter who they are, folks volunteering and participating in the process and building community and trying to do things,” Soto-Martinez said. “Our job is to be there for folks. So we want to make ourselves completely available to the community in many different fashions.”

Soto-Martinez said as a union organizer, he spent time on many different campaigns and issues, such as worker rights, immigration and criminal justice reform. He said his plan as councilman is to focus on larger societal issues, but also quality of life issues affecting individual neighborhoods and residents.

“That’s the bread and butter, right. I think most folks engage the council on that level, so we want to have a robust team of field deputies that will engage with folks,” he said. “And what I think is different is we want to have community leaders be part of the office as much as possible. Oftentimes, the deputies are overwhelmed with issues around homelessness. So we’re going to create an entire team just to address the issues of homelessness. That will take some of the pressure off the field deputies so they can really focus on all the things [in neighborhoods].”

The new councilman also said he is optimistic about the prospect of using funds generated by Measure ULA to address homelessness and housing. The measure was approved by voters in November and places a tax on real estate transactions of more than $5 million. It is expected to raise up to $900 million annually for affordable and permanent supportive housing, and renter assistance.

“I see an incredible opportunity of bringing in the coalition of folks that worked on that, and working with my colleagues on the council and making sure that we use that money effectively, and it has the most bang for our buck,” Soto-Martinez said.

He said he has met with his predecessor and other members of the City Council, as well as incoming Mayor Karen Bass. He plans to work closely with council colleagues, city leaders and staff to hit the ground running and get things accomplished.

“We are 15 people, and we are given a responsibility to be the best stewards for the city, and we need to make it successful. It doesn’t matter where they fall in the ideology spectrum,” Soto-Martinez said. “I’m committed to trying to move the city in the right direction.”

The Christmas card: Merry Christmas from the Erskines

Not sure which it is, at one point he says he wants to hit the ground running in another he admits there’s a lot he and his staff need to learn first. Most of the interview was Soto Martinez word soup promising this that and the other thing. For example he promised to sit down and talk to the homeless about why they are homeless. If that is true then on day one he needs to move to defund LAHSA because if they don’t have that info what the hell having been doing the last decade? It feels like Soto Martinez will do alot of sticking his nose where it doesn’t belong while doing nothing to help constituents.