Sen. Allen sworn in for new term in California Legislature 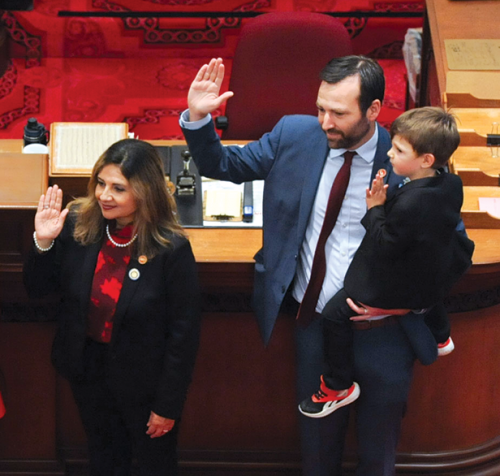 State Sen. Ben Allen was joined by his wife and son when he took the oath of office for his new term on Dec. 5. (photo courtesy of California Sen. Ben Allen)

After receiving more than two-thirds of all votes cast in the Nov. 8 election, State Sen. Ben Allen (D-Santa Monica) was sworn into office on Dec. 5. Both houses of the California Legislature kicked off the 2023-2024 legislative session with organizational votes and family celebrations. Legislators will be in recess until January 5.

“Over the past several years, the legislature and the governor have strengthened our state’s fiscal condition despite unprecedented surprises. We built up reserves, paid down debts, assisted struggling Californians in a pandemic and continued to address the effects of climate change,” Allen said. “As we prepare to tackle the next wave of economic and policy challenges, I want to congratulate my new and returning legislative colleagues on their electoral victories. Having authored the Voter’s Choice Act of 2016, I’m heartened that Californians benefitted from our convenient and secure voting system to make their voices heard.”

Allen was first elected to the Senate in 2014. An attorney and former school board member, he has authored crucial legislation in the areas of environmental protection, climate change, green transit, education funding, government transparency, electoral reform, economic development and access to housing. Raised in Santa Monica, Allen is a son of teachers and holds degrees from Harvard, Cambridge, and UC Berkeley. He and his wife Melanie have one son.