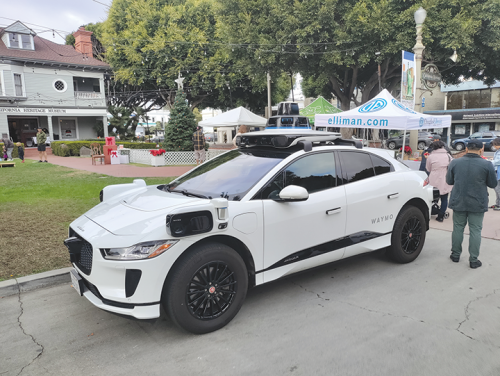 Residents of the Miracle Mile and Beverly-Fairfax District may have noticed a white car with cameras on its sides and roof driving through their neighborhoods recently.

The vehicle is operated by Waymo, a company planning to launch an autonomous ride-hailing service in which passengers call for a ride and a vehicle with no driver picks them up and takes them to their destination. The service is already offered in Phoenix and San Francisco, said Alexander Hall, a public affairs specialist with Waymo. Pending approval of state and city permits, Waymo hopes to soon launch the service in Los Angeles.

Currently, Waymo cars are being operated in the community by drivers who are mapping the streets and community using artificial intelligence, or AI. The vehicles are not currently accepting passengers.

Cameras, RADAR and LIDAR, which creates a 3D picture of the vehicle’s surroundings, are used to guide the vehicles. Once the mapping and data collection process is complete, the vehicles will have the ability to autonomously navigate in the area without a driver.

Hall joined the Wilshire Rotary Club on Dec. 21 to explain Waymo’s plans and inform the community about the innovative method of getting around town. Waymo was created from the Google self-driving car project, and is part of Alphabet Inc., parent company of Google and its subsidiaries.

Waymo is similar to other ride-hailing services. Passengers download an app, which they use to summon rides. In addition to the Miracle Mile and Beverly-Fairfax District, Hall said the company is looking to potentially offer the service in Hollywood and West Hollywood, downtown Los Angeles and Santa Monica.

Hall said no launch date has been set, but the company is eager to make the service operational as soon as possible. In addition to Waymo, Lyft and Uber have also announced plans to launch autonomous ride-hailing services in Los Angeles.