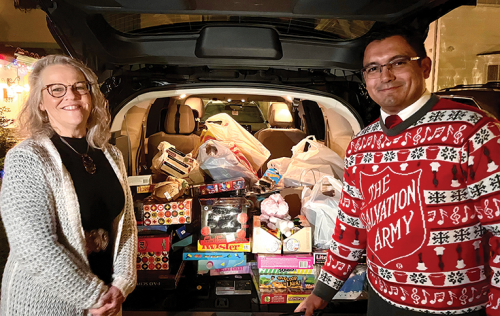 The Wilshire Rotary Club hosted Give A Gift To Santa on Tuesday, Dec. 13 at the home of Toni Hodgkiss. As in years past, the project benefited the underprivileged children served by the Salvation Army’s Red Shield Club downtown.

“Give a Gift to Santa started about 25 years ago, when Dan Hodgkiss was president of the club and I was the director of community service,” Rob Barnes, co-director of community service, said. “At the time Dan and I, along with several other Wilshire Rotary members, had young children. We wanted to combine a toy drive for the children served by our long-standing partner, the downtown Red Shield Club, that could also serve as a holiday event for our club’s children, and to introduce our children to the goal of Rotary service to the less fortunate. I proposed the idea of a holiday party for the Wilshire Rotary members and their small children but with an important twist: instead of the kids sitting in Santa’s lap and receiving a toy, they would instead present Santa with a gift for the children of the Red Shield. Naturally, Dan was a great Santa and the party itself was a hit, with a generous donation of toys for the Red Shield Club’s own Christmas party for its children. Give a Gift to Santa has been a holiday tradition at Wilshire Rotary for two decades, and we still come together as a club to toast the holidays, donate lots of toys (and money) to the Red Shield Club, and most importantly, demonstrate Rotary ideals while hopefully making the season a little happier for those children served by the Red Shield Club.”

Wilshire Rotary club founded in 1932, is one of the oldest Rotary clubs in Los Angeles with a rich history deeply rooted in service. All proceeds go back to the community along with Red Shield proceeds and charitable giving support Operation School Bell, Van Ness School for the visually impaired, Larchmont Charter, ImagineLA, HopeNet and Alexandria House, among others. For information, visit rotary.org.