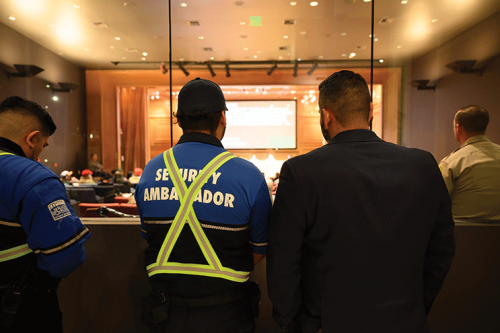 The West Hollywood City Council decided to stay the course during its Dec. 19 meeting, moving forward with a plan approved earlier this year to cut two deputies from the West Hollywood Sheriff’s Station, effective Jan. 1. Additional motions related to public safety were also discussed, including a general briefing on the state of public safety in the city which consumed nearly two hours of the meeting. Among other items, the council unanimously adopted its community safety and well-being strategy.

However, the motion addressing the sheriff’s station cuts was more contentious. In June, the West Hollywood City Council approved a budget that called for a reduction in sheriff’s deputies and an expansion to the Block by Block ambassador program. Regular deputies were set to be reduced by five by next year, though an entertainment district deputy was also added, specified to patrol the nightlife areas of West Hollywood. The council voted 3-2 in favor of cutting the first two of the five deputies.

Both Mayor Lauren Meister and recently-elected Councilman John Heilman voted against the motion.

“We always do more with less however,” Moulder said. “The safety of our community is a singular focus, and we should do everything we can to enhance service to our community and put more deputy sheriffs on the street for our community to keep people “We want to make sure that whatever we’re doing with public safety as we move forward with our community wellbeing plan, that it’s working,” Meister said, advocating for keeping the deputies and adding a sergeant for the entertainment district.

Heilman, who campaigned with public safety as his primary issue, spoke in favor of keeping the current staffing levels at the sheriff’s station.

“I think if you go forward with cutting two deputies that’s not maintaining the status quo,” Heilman said. “It’s maintaining a decision that was previously made. I understand your frustration with crime is not being solved. But in fact, as Mayor Pro Tem [Sepi] Shyne pointed out, the [crime] statistics have been getting better in the second half of the year and that’s because of not only the presence of Block by Block but because of the work that the sheriffs have been doing.”

Shyne, who has long been in favor in sheriff’s station cuts, spoke to some of the other council’s concerns.

“I actually want to say that crime has come down, and you’re absolutely right Councilmember Heilman,” Shyne said. “It has [happened] with the partnership of the sheriffs and Block by Block ramping up, which shows that this alternative program and Block by Block has been an incredible addition to our community safety program.”

“To me, it’s not a matter of making the most with less, it’s just doing more different. And we haven’t given this idea yet a test,” Byers said.

A staff report said that the adopted safety strategy “is a methodology that emphasizes the use of analysis to support a shift towards preventative, social development-oriented interventions that, over time, reduce the need for incident response.”

Public commenters disrupted the meeting on several occasions, prompting Meister to ask for quiet within the council chambers multiple times.

A specific incident was a point of contention within a group of protestors that individually addressed the council. On Dec. 7, the West Hollywood Sheriff’s Department responded to a report of a domestic violence incident in the 1100 block of Poinsettia Place around 3 p.m. Deputies were blocked from entering the lobby of the building by two women, one of whom was Annie Jump Vicente, who said the sheriffs needed a search warrant to enter the premises. A scuffle ensued, and Vicente was arrested.

“Get rid of the sheriffs. They don’t do anything good for anyone,” Vicente said. “I saw one of your guards started coming down here the moment that public comment started and I wonder why. I’m tired as a trans woman of being abused.”

The group came with signs and interrupted the meeting on several occasions. During a recess, they also approached the dias and spoke to council members individually.

“You’re going to continue funding the sheriffs because you don’t care about people like me. You just don’t. Hey, sheriffs, get out of here. Why are there so many of you in here? Go,” Vicente said.

Updated crime statistics and measures of the effectiveness of the cuts to the sheriff’s department will be presented to the council at the end of the first quarter of 2023. After this report, the council will consider whether or not to continue with cutting an additional three deputies.