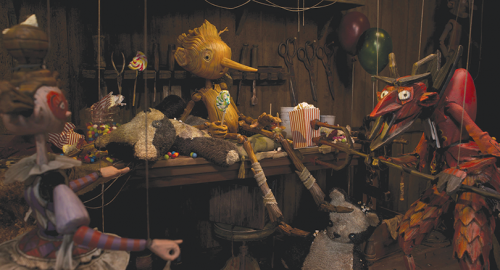 Disney’s last “Pinocchio” seemed to close the door on the wooden boy whose lies are transparent. Nobody told Guillermo del Toro, the incomparable filmmaker whose first attempt at stop-motion directing set a new standard for an already remarkable cinematic medium.

Del Toro’s films fall into a few camps: action, eerie horror and fairy tale. They all rock similar aesthetics, but his fairy tales are never straight forward. “Pan’s Labyrinth” embarks upon an underground fantasy kingdom amidst fascist Spain, best pic winner “The Shape of Water” features a unique monster-human romance during the Cold War and “Pinocchio” wonders what an animated puppet would do during Mussolini’s reign.

The guy knows not a simple story. Layers upon layers decorate each of his masterpieces, even those that might fall short. This stop-motion story serves as a thematic sequel to “Pan’s,” “Shape” and others that reject escapist fantasy. Fairy tale oddities don’t make life easier. They mirror surrounding plights.

In del Toro’s telling, Geppetto (voiced by David Bradley) creates a puppet out of severe grief. Following his son’s death during the Great War, the beloved woodcarver planted a pine cone near his son’s grave. The resulting tree becomes Pinocchio, given life by the Wood Sprite (Tilda Swinton), a mystical being who desires to end Geppetto’s grief.

That doesn’t work so well. The anthropomorphic puppet (Gregory Mann), inspired by a unique wood design from Gris Grimly’s 2002 illustrations, is nothing but trouble. He does what he wants, which creates a whole lotta challenges for a grieving father and a pretentious insect, Sebastian J. Cricket (Ewan McGregor), charged with the boy’s moral development.

Add to that those who would not see a real boy but opportunity. There’s local podestà (Ron Perlman), who first believes youthful disobedience must be controlled for the good of the country before realizing a wooden boy could also be a government asset.

Count Volpe (Christoph Waltz) has other plans. Pinocchio is a star that can elevate his show, earn him an audience with the Duce. 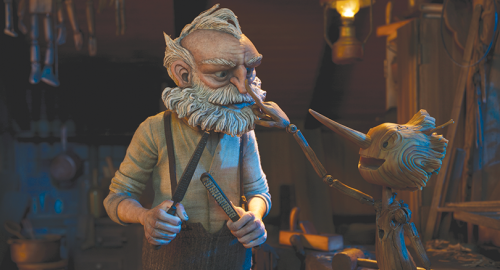 So Pinocchio stumbles upon several misadventures, Geppetto always one step behind. Some aspects of the story have already earned plenty of coverage, like the sea creature bit, but this isn’t regurgitation.

To start, this Netflix feature enjoys plenty of original songs from the film’s composer Alexandre Desplat with lyrics by Roeban Katz. And the stop-motion animation is incredible, some of the best around. (You might wanna check out “Handcarved Cinema,” a 30-minute special on the film’s production.)

This “Pinocchio” is darker. Don’t let a PG rating “for dark thematic material, violence, peril, some rude humor and brief smoking” fool you. It sports a starkly different vibe than a Pixar flick the MPAA designates for the same age.

“Pinocchio” explores death at a young age, along with a tragic chapter in world history. And the ending feels much like a classic fairy tale unedited for today’s younger demographics, pulling harsher elements from the original 1883 novel by Carlo Collodi.

Atop that, del Toro does what he does best, featuring creatures ripped from mythology and horror iconography, like Death (also Swinton), that present a world brimming with equal parts human drama and fantastic whimsy.

But prepare to cry. The songs and stunning stop motion are a red herring for a story designed to lure any spectator’s empathy to the surface, unwilling to allow animation’s preconceived expectations dictate what such a film should or shouldn’t depict.

Without question, “Guillermo del Toro’s Pinocchio” is the best animated feature of the year. Full of spirit, beautiful visuals and a rich, complex purpose, this is the kind of adult story oft missing amongst non-live action.

Revitalizing The Den on the Sunset Strip