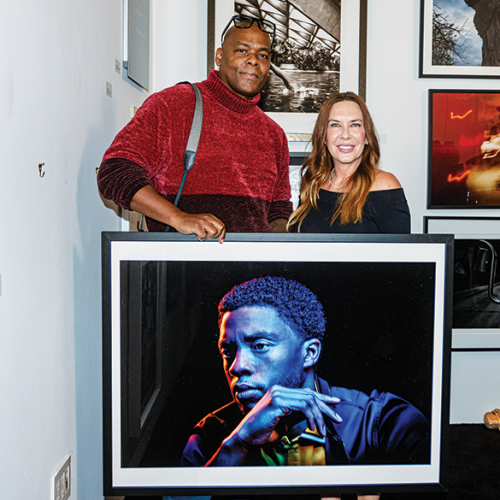 A photo of Chadwick Boseman by Kwaku Alston was among the items auctioned off at ANGELPHOTO 2022. (photo by Noe Garcia/Project Angel Food)

“ANGELPHOTO was an amazing event to help feed our critically ill clients, and thanks to the generosity of those in attendance, we raised thousands of dollars to help support our cause,” Project Angel Food CEO Richard Ayoub said. “None of this would be possible without the talented artists who so graciously donated their artworks to Project Angel Food. Since the very beginning, the fine arts community has been our most dedicated supporters.”

A cocktail reception and preview kicked off the swanky evening with more than 250 people in attendance. The live auction began at 7 p.m. and featured 15 artworks, including photographs of Andy Warhol by Michael Childers, Pamela Anderson by Sante D’Orazio, Chadwick Boseman by Kwaku Alston, Angelina Jolie by Firooz Zahedi, Christina Aguilera by Miranda Penn Turin, and pieces by Ed Ruscha, John Baldessari and Herb Ritts.