O’Farrell reflects on success during tenure on City Council 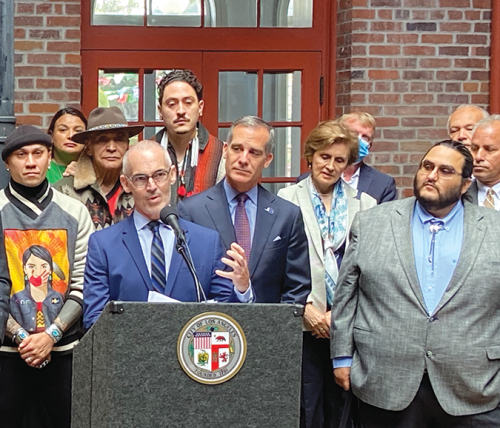 Since 2013, Los Angeles City Councilman Mitch O’Farrell has been a driving force in the 13th District, persistently working to ensure constituent needs were addressed while taking on larger matters affecting the entire city such as homelessness, housing and public safety.

On Dec. 12, his two terms as councilman will come to an end, after he was defeated by labor organizer Hugo Soto-Martinez in the Nov. 8 election. Soto-Martinez will be sworn in on Monday, and O’Farrell plans to embark on a new journey that he said will involve working in the private sector. He declined to announce any concrete plans, but said they will not include running for public office again. O’Farrell said it was never his goal to climb the political ladder when he started as a field deputy for then-Councilman Eric Garcetti 20 years ago, and he has no desire to do it now.

“I like to think that my entire career has been about helping people, which I’ve done since I was in my 20s,” O’Farrell said. “I was never enamored with the trappings of public office. I always just focused on what my job was and is, and that is to be responsive, to be transparent. I had only planned to serve a third and final term in the 13th District and that was going to be it anyway, so that shouldn’t come as a shock. It certainly isn’t a shock to people who know me.”

O’Farrell said he is grateful for his supporters and the opportunities he had to make the city of Los Angeles a better place. He highlighted his work on ending homelessness as a hallmark of his service, and said he is proud of the number of people he helped move into housing.

“More than 1,000 people housed in the last two years,” O’Farrell said. “It was the CARE+ days of service, it was a requirement that extensive outreach and engagement was conducted before any form of enforcement would roll in. The real takeaway, though, from what we did, is we stood up more permanent and transitional housing than just about anywhere else in any other council district.”

O’Farrell also touted his use of the organization Urban Alchemy and the CIRCLE program, which utilizes an unarmed response for incidents involving homeless individuals suffering from mental health crises. He also employed a full-time homelessness coordinator, Hector Vega, to oversee the efforts on ending homelessness.

“Over the last two years in Hollywood, where the CIRCLE program has been operating for a year, we’ve reduced homelessness by 57% in the 13th District, so that’s where the bulk of the of the success was,” O’Farrell added.

The councilman also touted his successes in promoting equality and equity in Los Angeles. A member of the Wyandotte Nation of Oklahoma, he was the first and only Native American to serve on the Los Angeles City Council. In 2017, O’Farrell led an effort to replace Columbus Day with Indigenous People’s Day in Los Angeles, and the first IPD was observed in the city on Oct. 8, 2018.

O’Farrell is also among a small number of current or former openly gay council members, and championed the rights of people from the LGBTQ community during his two terms in office. In June 2022, O’Farrell helped organize the return of the L.A. Pride Parade to Hollywood, and a plaque was installed at Hollywood Boulevard and McCadden Place to permanently mark the occasion. When O’Farrell leaves office, there will no longer be Native American or LGBTQ representation on the council.

“[I am proud of] elevating the importance of Native American and Indigenous tribal communities. No one else has done that [on the council] to the degree that I have, being of Native American heritage myself. So that representation is important and will no longer exist,” O’Farrell said. “And it’s also worth noting, there’s no longer any [LGBTQ] representation in city leadership at all. So those communities are just going to have to really stand up and demand to be heard and seen and listened to. And my work to uplift the transgender community stands on its own as well. I hope someone will continue that work.”

O’Farrell said he thoroughly enjoyed his experience of serving in city government, especially working with people. He said he is proud of his efforts to rebuild and restore the Hollywood Walk of Fame, to revitalize and reopen the Frank Lloyd Wright-designed Hollyhock House in Barnsdall Art Park, and to create symbolic gateways in Historic Filipinotown and Little Armenia. O’Farrell also said he is proud of helping to enact a mural ordinance that led to protections for public art throughout the city, and his work on establishing funding streams for public art projects created by Angelenos.

“I loved the experience because I loved delivering results on behalf of my constituents,” O’Farrell said. “And those results were anything as basic as installing an all-way stop intersection in the middle of a neighborhood to building literal bridges across the Los Angeles River or housing 1,000 people in the last two years who were previously homeless in the 13th District. Those are successes that really are unrivaled and I feel good about those.”

O’Farrell also said he has met once with his successor, and will be watching how he handles the job moving forward. Until then, he said he will continue serving the people of Los Angeles until his final day.

“I’m just focused on wrapping it up and making sure that we answer all calls and requests and follow through on all my commitments until the last day,” O’Farrell said. “My obligation is to the constituents that put me in office in the first place and my team, in this very short timeframe. It will be up to the new administration, to do what he finds necessary to fulfill his campaign promises. It’s time for something else, and I’ll put all my energies into that next phase.”